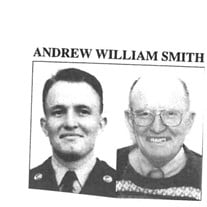 Andrew William Smith, 89, a resident of Ephrata, Washington, passed away Saturday, Sept. 26, 2020 at Brookdale Hearthstone Moses Lake Senior Living in Moses Lake, Washington. Andrew was born April 28, 1931 to Clayton and Dee (Campbell) Smith in Fairfield, Iowa. His sister Evelyn was also born in Fairfield. When WWII started, they moved to Los Angeles, Calif. where his dad worked for Douglas Aircraft plant as a foreman and built airplanes for the war. When the war was over, they moved to Palmdale, Calif. and bought a chicken ranch. Andrew graduated from Antelope Valley high school in Lancaster, Calif. in 1949 and went to college for one year while working on the chicken ranch. In 1950, four months after the start of the Korean War, Andrew enlisted in the U.S. Air Force and served four years as a Military Police. He was stationed at Fire Island, Alaska and Boron, Calif.at a radar installation. He was awarded the Good Conduct Medal and the National Defense Service Medal. When he was honorably discharged from the Air Force Andrew went back to Palmdale to work on the chicken ranch. He was married to Annis June Hutton January 10, 1958 in Reseda, Calif. They lived in Palmdale and both worked on the chicken ranch. Their daughter Andrea was born in Lancaster, Calif. In 1963 Andrew and his family, along with his parents moved to the Ephrata area to farm. One year later they were joined by his sister Evelyn and husband Larry Fabian and their sons Greg and Todd. They farmed together for over 34 years as And-Lar Acres. They had to clear at least 100 acres of virgin farmland before they started farming – raising cattle and hogs and growing wheat, alfalfa and beans. Andrew and Ann were blessed with three sons – Arlyn, Allen and Anthony – while they lived on the farm. Andrew was a volunteer for the Block 71 firehouse, retiring in 1997 after many years of service. The Smiths and Fabians sold the farm in 1997 and moved into Ephrata only four houses down the street from each other. Andrew was raised in a Christian home and at the young age of 11 was baptized. He was a faithful member of the Ephrata Church of Christ where he served as a Deacon and church treasurer for many years. He did many things for the church that most people didn’t know about because he was a very humble person. He enjoyed woodworking and loved to read! His thirst for knowledge was huge especially when it came to the Bible! Like his father, Andrew could fix anything or build anything out of extra stuff laying around the farm because he never threw anything away! Andrew’s health started to decline only in the last year so he and Ann moved to Moses Lake in June 2020 to the Brookdale retirement home. Andrew is survived by his wife Ann of 62 years; daughter Andrea (Mike) Schield of Moses Lake; sons Arlyn of Soap Lake, Allen (Ginger) of Ephrata, and Anthony of Quincy; six grandchildren – Derek, Justin, Tyson, Jared, Kelsey and Aubrey; and 10 great-grandchildren; his sister Evelyn and her husband Larry Fabian of East Wenatchee, Wash. There will be a graveside service Saturday, Oct. 3 at 1 p.m. at the Ephrata Cemetery and a gathering at his son Allen’s home following the service. All friends are welcome to attend. In lieu of flowers, please make a donation in Andrew’s memory to your favorite charity. Please express your thoughts and memories for the family at www.nicolesfuneralhome.com. Arrangements are under the care of Nicoles Funeral Home of Ephrata, Wash.

The family of Andrew William Smith created this Life Tributes page to make it easy to share your memories.