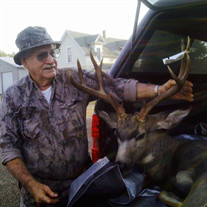 Arther E. Phillips, 79 of Ephrata, Wa; passed away with his family by his side on Friday, November 28, 2014. He was born on May 14, 1935 in Cookville, MO to John Herman Phillips and Mabel Ailene Culver Phillips. On April 2, 1953 Art married the love of his life, Shirley M. Sumners in Carthage, MO. Art drove cattle truck for about 8 years in Missouri, then the family moved to Oroville, Wa where he worked in the orchard and became the manager. He then started to work for construction companies as a truck driver, heavy equipment operator, and became a plant operator on a rock crusher and traveled around the state of Washington and Alaska for about 30 years. He retired due to an on the job injury. Art loved to go camping, fishing, and hunting just to be outdoors. He spent the last few years taking long walks with his dog Missy (Jack Russell Terrier) and when relaxing in his recliner chair, Missy would lay on his left shoulder chest area and they would take naps in the chair. He also attended the Church of Christ in Ephrata. Art is survived by his wife Shirley Phillips of Ephrata, his children Debra (Fred) Bevier of Tonasket, Brenda (Joe) Bevier of Ephrata, Carla (Archie) Shirley of Newport, Angela Phillips, and Arther Phillips Jr. both of Ephrata, his sisters: Betty Smith, Velma McNary, and Patricia Cogzill, his brother: William (Bill) Phillips, 10 grandchildren, 15 great-grandchildren, 1 great-great-grandchild, and his dogs Missy & Rosie. He is preceded in death by his parents John and Mabel Phillips, his sisters: Mary Hill and Wilma Rabe, and his brother Homer Phillips. A funeral service will be held in Art’s honor at 11a.m. on Saturday, December 6, 2014 at Nicoles Funeral Home, 157 C St. N.W., Ephrata with interment to follow at the Ephrata Cemetery. The visitation will be held prior to the service at 10a.m. In lieu of flowers donations may be made in Art’s name to the American Heart Association at https://donate.heart.org . Please express your thoughts and memories for the family at www.nicolesfuneralhome.com. Arrangements are under the care of Nicoles Funeral Home of Ephrata.

Arther E. Phillips, 79 of Ephrata, Wa; passed away with his family by his side on Friday, November 28, 2014. He was born on May 14, 1935 in Cookville, MO to John Herman Phillips and Mabel Ailene Culver Phillips. On April 2, 1953 Art married... View Obituary & Service Information

The family of Arther Eugene Phillips Sr. created this Life Tributes page to make it easy to share your memories.

Arther E. Phillips, 79 of Ephrata, Wa; passed away with his family...