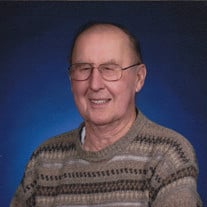 Augustine Jacob (Gus) Bennin, 91, of Soap Lake, Washington, passed away Thursday, July 24, 2014 at Columbia Basin Hospital in Ephrata, Washington. Gus was born December 22, 1922, in St. Nazianz, Wisconsin, to August and Clara Bennin. He graduated from New Holstein high school in 1941 and went to work in the shipyards first in Manitowac, Wis., and then in Bremerton, Wash., building ships for American forces in World War II. During this time he met and married Wilma Olson of Seattle, Wash. In 1947 they moved to the Soap Lake area where Gus worked building irrigation canals for the Columbia Basin Project and did cement work at many of the dams and other construction projects. From 1970-1980 he operated Gus’ Chevron in Soap Lake. Gus’ wife, Wilma (Billie) passed away July 22, 1972. Gus married Patricia Datin, Oct. 18, 1975. Pat died in 2007 and on July 21, 2012, he married Priscilla Johnson Asker. Gus was a lifelong member of the Catholic Church and was a 4th Degree member of the Knights of Columbus. He was instrumental in helping to build St. Rose of Lima Catholic School, which his three daughters attended. He enjoyed bowling, fishing, ice skating, playing cards and playing Santa Claus for his family and friends. He was an active member of the Soap Lake Lions Club for 44 years and a lifetime member of the Soap Lake Senior Center, where he served on the Board of Directors and organized pinochle and bridge. Gus traveled extensively with his wife, Pat, and on his 90th birthday he was still working out at the Ephrata Athletic Club. He was preceded in death by his parents; six brothers; and three sisters; his wife, Wilma; and second wife, Patricia. Gus is survived by his wife, Priscilla, at the family home in Soap Lake; sons, Michael (Cindy) of Catalina, Arizona, Steven (Sharon) of Los Banos, Calif.; daughters, Kristi Seefried of Yakima, Wash., Joan (Jim) Lyerly, of Clarkston, Wash., and Mary Dewey of Soap Lake, Wash.; 17 grandchildren, including Sarah (Jeff) Nelson, of Ephrata, Wash., Jesse Berry of Soap Lake, Wash.; and 14 greatgrandchildren. A Funeral Mass will be held Friday, August 1, 2014, at 2 p.m. at St. Rose of Lima Catholic Church in Ephrata. Interment will follow at Valley View Memorial Park in Soap Lake. Rosary will be held at 7pm on Thursday, July 31, 2014 at St. Rose of Lima Catholic Church. Please express your thoughts and memories for the family at www.nicolesfuneralhome.com. Arrangements are under the care of Nicoles Funeral Home of Ephrata, Wash.

The family of Augustine Jacob "Gus" Bennin created this Life Tributes page to make it easy to share your memories.