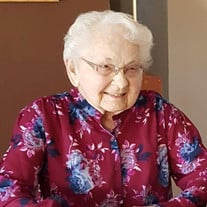 Vera Elaine (Anderson) Bauman was promoted to Heaven on July 4,2019 in Grand Coulee, WA with her family by her side. She was born July 6, 1929 in lsle, MN to John Gilbert Anderson and Elvera Francis (Hemerick) Anderson. She married Jim Bauman on May 5 1949 in Lake George, MN. In 1954 Vera and Jim moved to Wilson Creek, WA. They were blessed with three children: Douglas, Linda and Kathryn. Jim and Vera's kind hearts welcomed two more children to the family in 1970 with the addition of Julie and David Anderson. Vera was a familiar face in Wilson Creek and the surrounding communities. Over the years she worked at Weber's Grocery Store, drove school bus, and was the city clerk for 15 years. She was involved with TOPS and KOPS for over 25 years. Vera and Jim enjoyed the senior lunch at the school on a regular basis. Vera had many hobbies: cooking, sewing, knitting, crocheting, gardening, reading and spending time with her grandchildren and great grandchildren. She also enjoyed playing games, watching baseball, traveling, and learning new things. Every summer she planted a large garden and spent hours canning and freezing produce for the winter months. She was a fabulous cook and was known far and wide for her cinnamon rolls and hand-cranked ice cream. As a charter member, Vera was instrumental in the founding of the Grace Baptist Church of Wilson Creek in 1956. She sang in the choir, taught Sunday School, served as treasurer, and served as a leader in AWANA. Throughout the years she hosted many missionaries and visitors of the church until poor health forced them to sell their home and move to Coulee City in 2016. In Coulee City, they enjoyed lunch at the senior center four times a week and made many new friends. Vera was admitted to Coulee Medical Center October 11,2O18 and remained there until her death. During her stay she was surrounded by loving staff, who soon became family. Vera is survived by her husband of 70 years, Jim Bauman of Coulee City, WA. Daughters Linda (Loren) Kramer of Bellevue, WA and Kathryn (Ross) Thompson of Coulee City, WA; son David Anderson of Gold Bar, WA; her sister Ann Schiller of Forest Lake, MN; 14 grandchildren; 20 great-grandchildren; and numerous nieces and nephews. She was preceded in death by her parents Gib and Elvera Anderson, son Douglas Bauman, an infant son, daughter Julie Anderson, grandson Benjamin Anderson, brothers Donald Anderson, David Anderson, Richard Anderson and John Anderson. A celebration of Vera's life will be held at the Grace Baptist Church in Wilson Creek, WA July 20, 2019 at 2:00 PM with a time of fellowship and refreshments following. Memorial donations can be made to Coulee City Ambulance or to a charity of your choice in her honor. Please express your thoughts and memories for the family while visiting the online guestbook at www.nicolesfuneralhome.com

Vera Elaine (Anderson) Bauman was promoted to Heaven on July 4,2019 in Grand Coulee, WA with her family by her side. She was born July 6, 1929 in lsle, MN to John Gilbert Anderson and Elvera Francis (Hemerick) Anderson. She married Jim Bauman... View Obituary & Service Information

The family of Bauman Vera created this Life Tributes page to make it easy to share your memories.

Vera Elaine (Anderson) Bauman was promoted to Heaven on July...