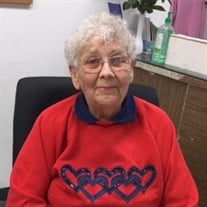 Beverly Jean Benedict, 91, went to be with her Lord and Savior Jesus Christ at her home in Soap Lake on Thursday, July 12, 2018. She was born in Spokane to Harry and Ethyl Ulrich on August 27, 1926. She graduated from North Central High School in Spokane and then went on to higher education at Washington State University. While attending WSU Bev joined the Delta Zeta sorority and deciding to major in Animal Husbandry now Animal Science. She had fond memories of her time there, especially living at Hilltop Stables that were constructed under the direction of Dr. Ensminger the Head of the Animal Husbandry Division. Of course, the most important memory she had of her college days was meeting her husband Reed. Reed who had graduated earlier there with an Animal Husbandry degree was working as the Herdsman at the WSU Beef Barn. Wouldn’t you know it, their paths officially crossed at a college dance. With similar interests and a love for animals and dreams of ranching and farming they married on March 30, 1949. After marrying they worked at several pure-bred Shorthorn and Hereford ranches in the Pullman area as well as California and Oregon. They finally settled just south of Soap Lake in 1957 where they started farming and ranching with their two young boys. Beverly was active in the community by attending the Soap Lake Community Church now the Evangelical Free Church. She professed her faith in Jesus Christ and was born again while watching a Billy Graham Crusade on the television. Bev was also a member of the Grant County Cattlemens Association with Reed, and she started and was the leader of a 4-H club for 23 years. Bev also drove bus for the Soap Lake School District, served on the Soap Lake School Board and was president of the PTA for a time. She was a member of the Lakeview Ladies Golf Association and a current member of the Soap Lake Senior Center where she served as treasurer until her strength and endurance began to waiver. After Bev’s active years of farming and ranching with Reed and her son Dean, she took up painting and especially enjoyed her time with Reed at Lake Pend Oreille in Northern Idaho during the summer months. She called that place a little piece of Heaven. Bev also enjoyed her time with Reed during the winter months in Arizona near Mesa. She especially enjoyed spending time with her grandchildren and great-grandchildren. Beverly Jean was a special creation from God and her life and memory will continue to impact and influence all that had the privilege to know her. Beverly is survived by her husband Reed of 69 years and her son Dean (Joyce) Benedict; Grandchildren: Sarah (Derek) Olson, Jessica Benedict, Peter (Sara) Benedict, Matthew Benedict and Suzanna Benedict; Great-grandchildren: Hannah, Nathanael, Bethany, Andrew and Elisha Olson – Nieces: Kaye (Bryan) Ross, Jeri (Steve) Thomas and Doni (Denny) Sanders; Nephews: Tom (Gwen) Benedict and Jeff Benedict. Beverly was preceded in death by her parents Harry and Ethyl Ulrich, sister Bulah and Brother-in-law Tommy St. Germain and son Richard Benedict. Celebration of life Service will be held Friday, July 27, 2018 at 2:00 p.m. at the Community Evangelical Free Church located at 110 East Main Ave. Soap Lake, Wa. Please express your thoughts and memories for the family at www.nicolesfuneralhome.com. Arrangements are under the care of Nicoles Funeral Home of Ephrata, Wa.

Beverly Jean Benedict, 91, went to be with her Lord and Savior Jesus Christ at her home in Soap Lake on Thursday, July 12, 2018. She was born in Spokane to Harry and Ethyl Ulrich on August 27, 1926. She graduated from North Central High School... View Obituary & Service Information

The family of Beverly Jean Benedict created this Life Tributes page to make it easy to share your memories.

Beverly Jean Benedict, 91, went to be with her Lord and Savior...