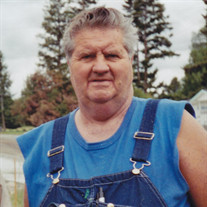 Darold Lemar Rhoads, 77, a loving son, husband, father, grandfather, and great-grandfather passed away on Friday, January 22, 2016 at his home in Chattaroy, surrounded by his children, and into the arms of his precious Savior and to his forever home. He was born in Spokane, Wa on May 20, 1938 to Miles and Leora Rhoads, and later joined by a sister, Karen, and a brother Dwight. He grew up on the family dairy farm near Spokane, working alongside his parents. In 1965, Darold moved his family to Soap Lake, WA where along with his parents and brother, they operated Rhoads Dairy. He married Peggy Jo Cody on March 8, 1955. She was the center of his life and together they raised six children. In 1978, he left the dairy business due to health reasons and began delivering the Spokesman Review newspaper. For a short time he worked for Dan Gettman near Odessa. Later they moved to Spokane where he continued to deliver newspapers, but directly from the paper plant to the motor route drivers. In 1990, they moved to Sweet Home, OR where he purchased and operated a cattle hoof trimming business until an injury left him disabled. In 1993, they moved back to Soap Lake to be closer to his parents and family and lived there until 2000 when they moved to Spokane. He was preceded in death by his wife Peggy, parents, and sister. Darold is survived by his brother Dwight (Patty) Rhoads of Soap Lake, WA; his six children: Dennice (Larry) Fountain, of Chattaroy, WA; Brenda Garza, of Ephrata, WA; Diana (Brian) Finkbeiner of Odessa, WA; Richard (Susan) Rhoads of Deer Park, WA; Beverly (Ken) Carbery of Troy, MT; and Dallas Rhoads of Elk, WA: 23 granchildren, and 36 great-grandchildren with 1 more expected in March. He is also survived by numerous nephews, nieces, cousins and friends. A funeral service will be held at 12 pm on Saturday, January 30, 2016 at the Community Evangelical Free Church, 110 Main Ave E, Soap Lake with a graveside to follow at Valley View Memorial Park. Please express your thoughts and memories for the family at www.nicolesfuneralhome.com.

Darold Lemar Rhoads, 77, a loving son, husband, father, grandfather, and great-grandfather passed away on Friday, January 22, 2016 at his home in Chattaroy, surrounded by his children, and into the arms of his precious Savior and to his forever... View Obituary & Service Information

The family of Darold Lemar Rhoads created this Life Tributes page to make it easy to share your memories.