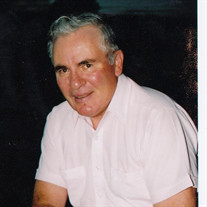 David Joseph Holland, 78, of Ephrata, WA passed away on Sunday, July 14, 2019 at Columbia Crest Center nursing home in Moses Lake, Washington. following a series of repetitive seizures and a twenty-six year battle with Parkinson’s. He was born in Kellogg, Idaho to George and Violet Holland and raised in Mabton, Washington with his brother, George. In his early years he was an avid high school sports player, having played basketball, football, track and baseball. After high school, he attended and completed courses in accounting at Kinman Business College, but his true passion was farming the land along side his father. He was baptized as one of Jehovah’s Witness in 1956 and remained very active until his death. He met his wife, Diane at the local Soap Lake Kingdom Hall and they married in 1972. His passion for farming took him on many wild adventures, including narrowly escaping from a backfired Combine that started a huge fire in his wheat field. To hear him tell the story, he ran full force out of the field -fire on his tail, a story often recalled. He retired from Western Farm Services in 2001, afterwards enjoying several hobbies with his wife. They included bird watching, public ministry, writing stories and interviews for the local paper. He also finished a lifelong goal of completing and publishing a book about his farming days. David never met a stranger and he would pepper you with questions that he genuinely wanted the answers to. Never short of humor or kindness, to know him was to know his loud and unique laugh, the echo of which will be greatly missed by many. He took pride in his family and his strong rooted faith. Until he drew his last breath, he remained ever true and faithful to his lifelong values and to his family. David is survived by his wife of forty-seven years, Diane (Webb) Holland, his son, Bross Holland and wife Carolyn, his daughter Desire Holland Loper and husband Jesse, sister-in-law Wilma Holland and nephews Mike and Jeff, his Uncle John Lucki and cousins John Jr., Beth, Joe, Nancy, his six grandchildren: Mercedes, Mariah ,Isis, MyLee, Scarlett, and Dayne, his great grandchildren: Trasyn, Annabelle, Liam, and Emberly. He was preceded in death by his parents and his brother, George Jr. The family would like to express their thanks to the wonderful help and care given at Columbia Crest Center this past year and to the friends and family for their constant encouragement and support. David’s Memorial will be held at: Kingdom Hall of Jehovah’s Witnesses 960 2nd Ave SE, Ephrata, Washington Sunday, July 28th, 2019 at 2:00pm Please express your thoughts and memories for the family at www.nicolesfuneralhome.com The arrangements are under the care of Nicoles Funeral Home of Ephrata, Washington.

The family of David Holland created this Life Tributes page to make it easy to share your memories.

David Joseph Holland, 78, of Ephrata, WA passed away on Sunday,...