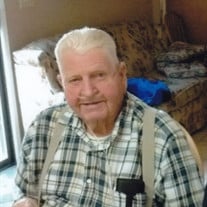 On Monday, Aug. 28, 2017, David A. Keyser, Sr., 82, went home peacefully in the company of loved ones. He was born on November 27, 1934. At the age of 18, Dave enlisted in the U.S. Navy, serving as an active participant in the Korean War, and serving a second tour as a munitions specialist in the U.S. Air Force. After his honorable discharge in 1961, he worked as a self-employed contractor, a journeyman boilermaker in the Puget Sound area shipyards, and ultimately retired from Boeing in 1998. Dave and his wife, Lee, moved to Ephrata in 2007. In his retirement years, he enjoyed dinner at Shari’s, winning big at local casinos and took great pride in his family. His schedule was dictated by Seahawks games, Mariners games, and professional ‘wrastling’. In April of 2016, he was privileged to be a participant on the Inland Northwest Honor Flight, which he enjoyed and he talked about often. Dave was preceded in death by his mother, Gertrude; his father, Algie; sister, Pam; and daughter-in-law, Angela. He is survived by his wife of 20 years, Lee Keyser; his children, Dave (Erin) Keyser and Cindy (Bill) Ruud; grandchildren, Maria (Matt), Jessica, Kyle, David (Shelby), Jordan, Matthew, Joshua and Marcus; and great grandchildren, Alexis, Joseph, Madison, Mae and James David. He is also survived by close friends, Laura and Louis Ortega and their children, Sarah, Kelly and Chris. His quick wit and contagious smile will be missed by so many. The family would like to extend their heartfelt thanks to the staff at Assure Hospice for the wonderful care they provided. In lieu of flowers, donations can be made in Dave’s name to the Inland Northwest Honor Flight. A visitation will be held from 5-7 p.m. on Thursday, Aug. 31, 2017 at Nicoles Funeral Home. A Funeral service will be held at 10 a.m. on Friday, Sept. 1, 2017 at Nicoles Funeral Home, 157 C St. NW in Ephrata, with a graveside service to follow at the Ephrata Cemetery. Please express your thoughts and memories for the family at www.nicolesfuneralhome.com. Arrangements are under the care of Nicoles Funeral Home of Ephrata, Wash.

The family of David Algie Keyser Sr created this Life Tributes page to make it easy to share your memories.