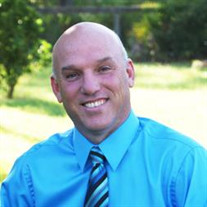 Devoted husband, father and follower of Christ, David, 52, went to be with the Lord on Monday, April 6, 2015. Dave was born January 19, 1963 in Hopewell, Virginia to Franklin and Shelva Sturkey. He graduated from Covenant Theological Seminary in St. Louis, Missouri with a degree in Theology. He pastored Cornerstone Church in Sarasota, Florida for 20 years until the Lord led him and his devoted wife Deanna to Community Church of Ephrata in Washington. Dave met Deanna, the love of his life, in Sarasota in 2012. They were married in front of family and friends on December 21, 2013. She followed him to Ephrata to serve without a doubt, knowing this was God's will for their lives. He had a true love and passion for the Word of God. This was clearly seen in the lives of his family members and the members of the churches that he pastored. Dave loved tennis, golfing and most of all hunting with his son Ben and his wife Deanna. Our most cherished memories of Dave are his incredible sense of humor, his laughter, and his heart for adventure. Dave is survived by his wife Deanna; children - Alexandra, Kaitlin, Benjamin and Abrielle; his parents, Franklin and Shelva; younger brother Donald; his beloved hunting dog, Reagan; and many more extended family and church family. A memorial service will be held at Community Church of Ephrata, 54 K Street SE, on Saturday, April 11, 2015 at 11 a.m. "My flesh and my heart may fail, but God is the strength of my heart and my portion forever." Psalm 73:26 "My heart is restless, until it finds rest in Thee."--Augustine

Devoted husband, father and follower of Christ, David, 52, went to be with the Lord on Monday, April 6, 2015. Dave was born January 19, 1963 in Hopewell, Virginia to Franklin and Shelva Sturkey. He graduated from Covenant Theological Seminary... View Obituary & Service Information

The family of David Sturkey created this Life Tributes page to make it easy to share your memories.