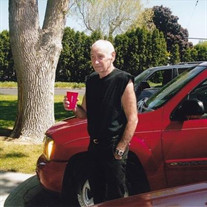 DONALD STEVEN GRUBB Donald S Grubb, 79, of Ephrata, WA passed away on Tuesday, April 4, 2017 at Sacred Heart Medical Center in Spokane, WA. He was born in Huntsville, AR to Ermal Osborne Grubb and Reda Harrison Grubb on May 4th 1937, joining his two older sisters Dorothy and Melba. When Don was five, the family migrated to Washington State for work, along the way they lost their grandfather, which was always a sad thing for Don. After they got to Washington State sister Barbara and brother, Richard were born. In the early fifties Dons Mom and Dad divorced and for awhile he lived with his father and worked in the potato fields in Idaho and soon after driving truck, but he always migrated back to Ephrata, which he referred to as God’s little acre, he loved this town. One of his proudest moments were in the United States Air Force, from 1955-1959. He was a mechanic Jet Eng on U-2’s and was always proud of that fact, he loved talking about the time a U-2 ran over his toes, which plagued him all his life, he referred to them as his Air Force toes. He met many Captains, Lieutenants and Airmen, whom helped shape who he was and always talked about Captain Crouthers with a smile. When he had leave time, you would find Don, Michael Macklin, Bobby Pittman running around the country having fun. He told a story about their roaming quite often and laughed every time. In 1967 he met and married Sharon Lawyer, they were the parents of Howard, Donald II and Pete. They divorced in 1983. Sharon passed away in 2015. Don also loved coaching little league along with his long time friend, Pete Horn, they coached all their boys together. It seemed like the two could always find something to get into and loved telling about it, laughing all the way. He especially loved telling about their trip to Colorado and how much fun it was. In 1985 he married Rosey Jenkins, they were married until his death, raising all the children as their own, he always said there is no such thing as a step child, one of the last things he said was, “I love all you kids” even though he didn’t need to. Don worked for the City of Ephrata, water department and sewage treatment plant or anywhere else they wanted him to including plowing or digging ditches, along with his co worker Claude Gates and Paul Wasko, whom he admired greatly. He retired from the City in 1985 and enjoyed his retirement immensely, fishing until he said he was all fished out, he loved fishing with his brother in law Delton Young, whom he had known since they were young boys, when they got together it was always story telling time of their youth, and so entertaining. He loved fishing with his kids and grandkids when he got the chance. Don is survived by his wife Rose, children Howard, Donald II, Pete and his step children Jeffrey Jenkins, Joyce (Jim) Frashure, Brenda Jenkins, Sheila (Lee) Herring; Grandchildren: Greg Bretches, Zachary Herring, Jesse Vargas, Ashley Herring, Hannah Jenkins, Brittany Herring, Samantha Grubb, Justus Frashure, Hailey Herring, Cassidy Frashure, Suzette, Caleb Grubb, Seth Grubb, Daylan Grubb, Great Grandchild Hayden Frashure. Don was preceeded in death by his Mother and Father and his sister Melba. Special thanks to Gennifer Markin, Ernie Farmer, Julie Thill, and many other friends and family who helped in our time of need, a special thank you to Columbia Basin Hospital and Sacred Heart. In lieu of flowers, donations may be made to a Food Bank of your choice. Please express your thoughts and memories for the family at www.nicolesfuneralhome.com. A Celebration of Don’s Life will be held at a later date, to be announced.

The family of Donald S Grubb created this Life Tributes page to make it easy to share your memories.