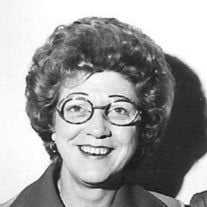 Doris (Spence) Edwards passed away at home in Ephrata, WA on Dec 10, 2013 after an extended illness. She was born January 31, 1929 at Mitchell, NE. She grew up and graduated from High School in Twin Falls, ID. Her Mother and Step-Father were Eunice and Leo Spence, both now deceased. She enlisted in the Navy after graduation, and after a fun filled boot camp, was transferred to the Naval Air Technical Traning Center, Jacksonville, FL. She completed Airman Prep school and Aviation Storekeeper school. While attending school, she met her future husband, Bill Edwards. They were married Jan 1, 1952 in Folkston, GA. With imminent transfer to a Command in CA., she decided to become a civilian again. After Bill completed his Navy enlistment, the family which now included daughter Vicki, who was born at the Naval Hospital in Jacksonville, visited Doris' parents and decided to put down roots in Twin Falls. Bill worked for the City of Twin Falls until he had a job offer with the Bureau of Reclamation at American Falls, ID. The family was now larger, having added daughters Sue and Jeri while in Twin Falls. Bill then transferred to Boise, ID, where Doris was employed by the VA Hospital. Bill accepted a job offer to Ephrata in 1972. This was the last move for the family. Doris went to work for the Columbia Basin Hospital where she worked until retirement in 1995. She was an Accredited Medical Records Technician and headed that department when she retired. Doris was a lifetime avid bowler and enjoyed bowling in Ephrata until snow destroyed the local alley. She was active in many organizations including Golfing with her buddies and playing cribbage at which she excelled. She joined Eastern Star and became friends with members from all over the state. She danced with the Line Dancin Grannies and enjoyed the many performances they did, both locally and around the community. She also enjoyed the Red Hat Society, Lady Elks and the local Ham Radio Club. She held a General Class License with the callsign K7PKS. She was also an enthusiastic crafter and was seldom without one of her many projects in her ever present sewing bag. Doris was a staunch supporter of her family in whatever they needed. She was giving of herself and her time to others needing her kind help. She will be greatly missed by those who knew and loved her. She had requested no funeral service. The family plans an Eastern Star Memorial service sometime in the New Year. This will be open to the community. Doris is survived by Bill, her Husband of 62 years, her three daughters, Vicki at the home, Sue in Boise and Jeri (Tom) Patty, Moses Lake; Grandson Tanner Sones (Wendy), Great-grandson Seth and Great-Granddaughter Zoe Sones, Wenatachee. Doris was preceeded by her Mother, Step-Father and Nephew Sam Spence. I would rather have a little rose from the garden of a friend, than flowers strewn around my casket when my days on earth must end. I would rather have a living smile from one I know is true, than tears shed 'round my casket when this world I bid adieu. Bring me all the flowers today whether pink or white or red, I would have a blossom now than a truckload when I am dead. (Author Unknown). Mom, you will always be in our hearts and we will miss you until we all meet again in heaven. Arrangements are under the direction of Nicoles Funeral Home of Ephrata, WA.

Doris (Spence) Edwards passed away at home in Ephrata, WA on Dec 10, 2013 after an extended illness. She was born January 31, 1929 at Mitchell, NE. She grew up and graduated from High School in Twin Falls, ID. Her Mother and Step-Father were... View Obituary & Service Information

The family of Doris Dorthea Edwards created this Life Tributes page to make it easy to share your memories.

Doris (Spence) Edwards passed away at home in Ephrata, WA on...