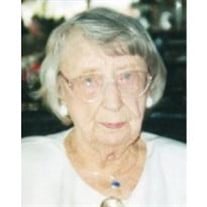 Graveside service for Dorothy Esther Padgitt Owen May 25, 1906-Sept 5, 2010 Dorothy was born to Harry W. and Anna Mayo Padgitt, of Ephrata. Her parents had married in Iowa in 1902 and moved to a wheat ranch in the Ephrata area. Anna returned to Iowa to her sister Theresa’s in Boone, IA, for Dorothy’s birth, and then returned to Ephrata. Dorothy grew up on the ranch with her three siblings, Isadore Ann LEE, Eva Forestine LUDDINGTON, and John Raymond (Ray) PADGITT. She attended the Wheatland county school through the 8th grade, then Ephrata High School, living with the Claypool’s during the school year. She then attended Cheney Normal School and received her teaching certificate in 1930, after which she taught at county schools including Ruff, Coulee View, Bunker Hill, and finally Wheatland. In 1931 she married Marion Owen, also of Ephrata, where they lived until 1945 when they moved to Tacoma, and later, to Federal Way. Growing up on the ranch she developed an affection for animals and gardening, which with her interest in family history she retained all her life. She corresponded with the families remaining in Iowa, the Mayo’s, the Benson’s and others , and also with her father’s half brothers and sisters, the Adam’s, in Spokane and Seattle. She was fiercely independent and lived alone after Marion died in 1980, continuing to garden and keep house. She was the last of her generation, being preceded in death by a daughter, Dorothy Valeta, her parents, husband, and siblings. She is survived by her son Darrel Owen, two grandsons, Doug and Jeff of Seattle, a niece Evelyn Bews of Kittitas, a great nephew Ray Luddington of Bonney Lake, a cousin, Francis Tripp of Wenatchee, as well as extended family. Graveside service will be held at Ephrata Cemetery on Saturday, 5 Nov. 2011 at 10 AM. Please express your thoughts and memories while visiting the online guestbook at nicolesfuneralhome.com. Arrangements are under the direction of Nicoles Funeral Home of Ephrata.

Graveside service for Dorothy Esther Padgitt Owen May 25, 1906-Sept 5, 2010 Dorothy was born to Harry W. and Anna Mayo Padgitt, of Ephrata. Her parents had married in Iowa in 1902 and moved to a wheat ranch in the Ephrata area. Anna returned... View Obituary & Service Information

The family of Dorothy Owen created this Life Tributes page to make it easy to share your memories.