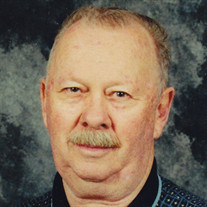 Edward “Ed or Eddie” Stanley Rhoades, Jr 73 of Ephrata, Wa left this material world to be with his lord and savior on Saturday, August 1, 2015 at home with his wife by his side. Ed was born November 13, 1941 to Edward Stanley Rhoades, Sr and Rosabelle Margaret “Rose” Rhoades in Chehalis, WA. He graduated from Chehalis High School where he started his love of sports playing basketball and baseball through his school years which provided him the foundation for which he would live much of his life. Ed entered the military in January of 1961 serving for 20 years in the Air Force. Ed married his sweetheart and love of his life Nancy E. (Davis) Rhoades on June 15, 1963 after a long courtship and engagement of one month. Two years later their daughter Sue E. (Rhoades) Sherwood was born in Anchorage, AK while stationed at Elmendorf Air force Base. Ed continued his love of sports by both playing and coaching while serving his country at various locations around the US and remote stations. He was given a son, Michael S. Rhoades in Sacramento, CA and so his family was complete. Ed was honorably discharged from the service after 20 years in 1981 with several commendations and awards for service. He moved his family back to Washington State to the little town of Ephrata to finish raising his children and continue his passion for sports by officiating baseball, basketball, football and softball for over 30 years. Ed received Washington Officials Association and Washington Interscholastic Athletics Association Meritorious Service Awards along with being inducted into the WOA and WIAA Hall of Fame. Ed is survived by his wife Nancy of Ephrata, a sister Evelyn Hitzroth of Oakville, WA, daughter Sue of Moses Lake, WA and son Mike of Ephrata, WA as well as six grandchildren, Gavyn, Jordan, Tristyn, Kennedy, Moriah, Micah, and many aunts, uncles, and cousins. A memorial service will be held on Saturday, August 8, 2015 at the Ephrata High School Performing Arts Center (PAC) at 1 PM. A short Honor guard service will be held at 1 PM on the High School football field and we will move into the PAC for the memorial service. Please express your thoughts and memories for the family at www.nicolesfuneralhome.com Arrangements are under the care of Nicoles Funeral Home of Ephrata, WA.

The family of Edward Stanley Rhoades Jr created this Life Tributes page to make it easy to share your memories.