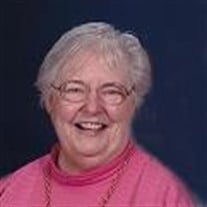 Laughter is rippling through Heaven as we mourn the loss of my Mother Eileen Bornheimer who passed away unexpectedly at Central Washington Hospital on July 27, 2018. Eileen was born Eileen Marie Seibert to George & Ameila Seibert on May 11, 1937 in Philadelphia, PA, she was the eldest of 4 girls. Eileen was a graduate of the class of 1955 at Holy Spirit High School in Atlantic City, NJ. One of her thrilling experience’s during high school was being a dancer for the Paul Whiteman show, it was like the first American Bandstand type show; she was also a member of the Civil Air Patrol during high school. After graduation she joined the Air Force where she was the weather lady. During that time, she met Earl Bornheimer, fell in love and got married; now unfortunately in those days if you were to marry and female you were honorably discharged so she only got to enjoy her dream job for 3 years. In 1963 unfortunately, things did not work out for Eileen and Earl and they divorced. Eileen’s Father George was in the hotel industry and when he got transferred to San Diego, CA. Eileen and I followed. Eileen worked for Pacific Southwest Airlines (PSA) for over 30 years in San Diego, CA. This is where she taught me the love for travel; we were able to travel the States and even got the chance to go to Europe. One of our best experiences was when we were in Rome and we got the chance to see Pope Paul VI; now with Eileen’s drive and determination we were able to get very close to the Pope that he touched our hands, we felt very blessed. Eileen even enjoyed the theatre and every chance we got we would go to a Broadway show. Somehow with my mother’s personality we were even allowed back stage to meet some of the actor’s, she just knew how to blend in and be part of the crew. After her retirement Eileen moved to Arizona where she was very involved with St. Vincent DePaul and continued her works with the Catholic Church, her community and family. In 2004 Eileen decided it was time to move up here to Ephrata to be closer to her family. It is here where she got involved in more activities with the Grant County Historical Society, Civil Air Patrol, Senior Centers both Ephrata and Soap Lake, Eileen was a member of the Grant County Veterans Advisory Board and of course St. Rose of Lima Catholic Church. Eileen was a person full of life, she was also an advocate and fought for people’s rights. One of her neighbors just told me that when they first met she could not remember Eileen’s name so if she was ever talking about her she would always call her “the laughing lady”. Eileen was a Mother, Grandmother, Great Grandmother and a US Air Force Veteran. Eileen is survived by her daughter Pam Hill (Steve), Ephrata; Grandson’s Joe Hill (Caitlin), Soap Lake, Rob Hill (Stefani), Ephrata; Great Grandchildren Aubrey, Madisyn, Skyler, Camden, Emmalyn & Greyson, and survived by her 101-year-old mother Ameila Seibert and 3 sisters, Connie, Geri and Roni (Don), and many Nieces and Nephews who she adored. Eileen was preceded in death by her Father George Seibert and Niece Debbie Sutton. A Rosary will be held Thursday August 30th at 7:00 and a Funeral Service August 31st at 2:00 at St. Rose Catholic Church. In lieu of flowers, please support your local Veterans or St. Vincent DePaul.

Laughter is rippling through Heaven as we mourn the loss of my Mother Eileen Bornheimer who passed away unexpectedly at Central Washington Hospital on July 27, 2018. Eileen was born Eileen Marie Seibert to George & Ameila Seibert on May 11,... View Obituary & Service Information

The family of Eileen M Bornheimer created this Life Tributes page to make it easy to share your memories.

Laughter is rippling through Heaven as we mourn the loss of my...