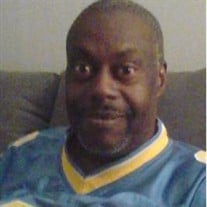 Eugene Williams Jr. was born on March 6, 1957 to the late Eugene Williams Sr and Shirley Tribble. Eugene got his education in Cincinnati, Ohio where he attended South Avondale Elementary, Samuel Ach Jr. High and Hughes High. He first met the love of his life Teresa “Jodie” Adams on November 12, 1984 in Cincinnati, Ohio. He moved to Moses Lake, Washington in 1988. During their relationship they had two beautiful children, Justin Williams and Janet Williams. Eugene and Teresa were married on April 12, 1994 in Moses Lake, Washington. Hook, as he was well known by, also enjoyed fishing, hunting with friends, boxing, old cowboy and karate movies, and most of all telling stories. Hook loved spending time with his grandkids and teaching them how to fish and box. Hook was a neighbor dad for many kids; they loved to come get good advice from him about life. He also loved his two dogs Zina and Slick the Pit. But most of all he loved to travel with his wife to different casinos. Hook worked at many different jobs in his lifetime. At the country club and Duns Window Service in Cincinnati, Ohio and Lin’s Restaurant and AmeriHost Inn and Suites of Moses Lake, Washington. Eugene leaves behind to cherish his memories, his beloved wife Jodie of 35 years. Four daughters and four sons, Justin Williams, Janet Williams both of Moses Lake, Wa., Monique (DeHeaven) Simpkins, Eugene Ralls, Shaday (Henderson) Lyons, Danny Ralls, Brandon Ralls of Cincinnati, Ohio and Desena Townsend of California. Eugene also leaves behind two sisters and one step sister; Vanessa Brown of Moses Lake, Madeline Williams and Stephine (Steve) Ledford of Cincinnati, Ohio. Eugene also leaves behind twenty-one grandkids and 2 great grandkids with a host of Aunts, Cousins, Uncles and his special friends; Wilson Holman, Clyde Crow, Antonio Gonzalez, Scott Pando and Hector Alaniz. They will truly miss their friend. Eugene was preceded in death by his mother Shirley (Andrew) Tribble, Eugene Williams Sr., Ruth Hill, Emanuel Hill Sr., DaVonna Daniels and Grandmother Ruth Daniels. Please express your thoughts and memories for the family while visiting the online guestbook at www.nicolesfuneralhome.com. Arrangements are under the care of Nicoles Funeral Home of Ephrata, Washington.

The family of Eugene Williams Jr created this Life Tributes page to make it easy to share your memories.