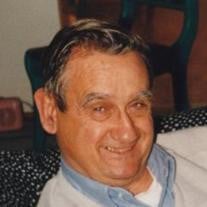 Frank William Cardwell Sr., 80, of Ephrata, Washington was born July 26, 1932 and passed away November 4, 2012 at the Central Washington Hospital in Wenatchee, Washington. Frank died from complications associated with a heart condition he had lived with for several years. He passed away in the company of his loving wife, sons and daughters, grandchildren and great grandchildren in a celebration of his life that would not have been possible without the staff and doctors of Central Washington Hospital. Frank passed at ease and comfortable knowing his family was with him and loved him. His family was his life and his life was his family’s. He will be missed very much. Frank was born in rural Jackson County Tennessee to Samuel and Lena Cardwell also of Jackson County. He was the oldest son and was preceded in death by his parents, older sisters Margret and Maverine, and his younger brother and sister, Daniel and Sandra. While he was still young, Frank’s family moved to Detroit, Michigan where he completed elementary school and high school. Frank was a hard working grocer through high school and worked a short time for the Chrysler Corporation before enlisting in the United States Air Force in 1950. He started his military career at Lackland AFB Texas and was assigned to Eglin AFB Florida in 1951. In 1953 he had a very short assignment in the Netherlands before landing at Manston RAFB England in 1954 where he met and married Yvonne at Saint Stephens Parish Church in Canterbury, England. They returned to renew their vows at Saint Stephens 50 years later in 2005. Frank was re-assigned to Tinker AFB Oklahoma in 1958, Naha AFB Okinawa in 1962, Randolph AFB Texas in 1966, and back to Lakenheath RAFB England in 1967. He and his family enjoyed traveling Great Britain, Europe, and the Mediterranean until his final re-assignment in 1972 to Fairchild AFB Washington where he retired from 22 years of active duty as a Master Sergeant, Chaplin Specialist, NOIC. Frank was assigned to the Air Force Reserve until his final discharge in 1982. Upon retirement from active service in the USAF, Frank and his family moved to Medical Lake, Washington. He attended Eastern State University in Cheney, Washington, where he received a Bachelor of Arts degree, Cum Laude in 1977. In 1978 Frank began a very challenging and rewarding second career with the Washington State Department of Social and Health Services in Grant and Adams Counties. Frank and his family moved to Ephrata, Washington where he and his wife, Yvonne, became a very active home for his 5 kids, 12 grandchildren and 12 great grandchildren. In addition to their own descendants, Frank and Yvonne were foster parents for hundreds of children over the 30 years they served with Washington State’s Foster Care Program at their home in Ephrata. Frank retired from DSHS in 1997. Shortly after retirement he was appointed to serve on the Area Agency on Aging by Governor Gary Locke. Frank is survived by Yvonne, his loving wife of 58 years, his sons Frank, Jr., John, Gregory, and Daniel, daughter, Tamara, and his 13 grandchildren and his 12 great grandchildren. Frank will be remembered as often traveling with a large family group in a variety of clothing that showed off his connections to the Eastern Washington University Eagles, Gonzaga University Zags, WSU Cougars, WWU Vikings, and the Ephrata Tigers. He enjoyed history and historic memorabilia and had a love of gardening and photography. Frank and Yvonne attended St. John's Episcopal Church in Ephrata. Frank was a very encouraging father, grandfather and great grandfather. He worked hard to provide the best opportunities he could so each one of his family would enjoy a rewarding life and we are all very grateful for him and the riches we have because he was in our lives. Church services for MSgt Frank William Cardwell Sr. will take place on Tuesday November 13th at 12:00 pm in the Fairchild Airforce Base Chapel,300 E Poplar Ave # 113,Fairchild Air Force Base,WA. He will be given a military honor ceremony and laid to rest in the Washington State Veteran’s Cemetery near Medical Lake at 3:00 pm. A reception will begin at 5:00 pm at the Hilton Garden Inn, 9015 West Hwy 2, Spokane. In lieu of flowers, his family asks we support veterans with a gift to the Washington State Veterans Cemetery, 21702 West Espanola Road, Medical Lake, WA 99022. Guests planning to attend the Chapel service at the Fairchild Airforce Base will need to call ahead (509) 247-2264or email [email protected] For directions to the cemetery please visit http://www.dva.wa.gov/PDF%20files/Dedication%20Event%20-%202010.pdf Please express your thoughts and memories for the family and view the online tribute video at nicolesfuneralhome.com. Arrangements are under the direction of Nicoles Funeral Home of Ephrata, WA.

Frank William Cardwell Sr., 80, of Ephrata, Washington was born July 26, 1932 and passed away November 4, 2012 at the Central Washington Hospital in Wenatchee, Washington. Frank died from complications associated with a heart condition he had... View Obituary & Service Information

The family of Frank William Cardwell Sr created this Life Tributes page to make it easy to share your memories.