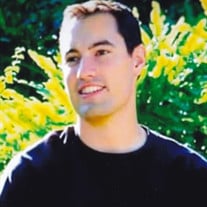 Garrett Paul Dano came into this world on June 2, 1986 in Moses Lake, Wash. He left this world on July 9, 2017; his family, his friends, and his community will never be the same. Garrett excelled at everything he set his mind to. He graduated from Moses Lake High School in 2005, graduated with all honors from Gonzaga University in 2009 and dreamed of serving in the armed forces and then becoming a law enforcement officer. He entered Officer Candidate School for the United States Marine Corp and made it eight weeks into the 10-week program before his appendix ruptured and he suffered sepsis. The recovery was long and difficult and prohibited him from completing the program. One of his greatest regrets was that he was never able to return. He wanted to be an “everyday hero,” he said. He began work for The Hartford in Florida and more recently in Virginia as an Underwriter. His colleagues praised him, calling him a “superstar.” They saw in Garrett the things we know to be true; unparalleled determination, thoughtfulness, a constant willingness to learn, trustworthiness, self-discipline, loyalty, a wonderful and wicked sense of humor, compassion, and an unshakable desire to protect the vulnerable. Garrett was a good friend, brother, and son. Heartbreakingly, his torment never allowed him to truly believe that. In 2013, Garrett met and fell in love with an 18-month-old boy named Jude. Jude called Garrett “Dad” and never stopped. Garrett’s commitment and devotion to be a dad to Jude never wavered, becoming Garrett’s greatest source of joy and pride. Garrett wanted to serve his country. He wanted to make a difference. He wanted to work hard, to take care of people and to get it right. Garrett just never believed he could get it right. But we couldn’t be prouder of our son, brother, dear friend, and dad. Rest in peace with the angels, Garrett. May you finally know, feel, and believe how loved you are; you were always enough. Garrett is survived by his loving parents, Garth Dano and Karen and Joe Druffel; his cherished siblings – Nicole (Steve) Prentice, Chera Justice, Kellen Dano and Cord McCabe; his grandmother, Dorothy Dano; and numerous aunts, uncles, nieces, nephews and cousins. He was preceded in death by his big brother Jarrod Dano and grandparents Harrison Dano and Don and Kay McPherson. A rosary will be recited at 7 p.m. Tuesday, July 18, 2017 at St. Rose of Lima Church in Ephrata, Wash. A funeral Mass will be held at 11 a.m. Wednesday, July 19, 2017 at Our Lady of Fatima in Moses Lake, Wash. In lieu of flowers please make donations to Behind the Badge Foundation or the Wounded Warrior Project.

Garrett Paul Dano came into this world on June 2, 1986 in Moses Lake, Wash. He left this world on July 9, 2017; his family, his friends, and his community will never be the same. Garrett excelled at everything he set his mind to. He graduated... View Obituary & Service Information

The family of Garrett Paul Dano created this Life Tributes page to make it easy to share your memories.