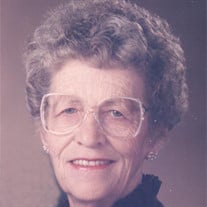 GAYLE BYRNELL NICKEL Gayle Byrnell Nickel, 88, longtime Ephrata, Washington resident, passed away peacefully at her home on Tuesday, July 15, 2014, surrounded by family and friends. She was born July 19, 1925 in Minot, North Dakota to George and Julia (Jacobson) Hustad, the oldest of six children. The family moved to Bend, Oregon in 1943 during her senior year in high school, where she graduated. After graduation she began her working career at a military base in the Bend area. The Hustad family moved to Tacoma in 1945 where she worked at Fort Lewis. While at Fort Lewis she met Robert C. (Nick) Nickel. They were married on February 24, 1946. In 1947 they moved to Ephrata which was Robert’s birthplace. He worked in heavy construction and she worked at Loree Grocery; the Ephrata army base until it closed; the Bureau of Reclamation; and for many years, at the Ephrata office of the Washington State Department of Transportation, where she retired. Over the years Gayle enjoyed boating and camping on family outings and was an avid reader. She and Robert traveled to the southern states often during retirement. She loved her family and took special interest in her grand- and great-grandchildren. Gayle was preceded in death by her husband, Robert in 2005; her parents; and three brothers, Gerald, Richard, and Alan Hustad. She is survived by two daughters, Marilyn (Russell) Sage of Soap Lake, Wash. (Lakeview), and Roberta (Ben) Davis of Ephrata, Wash.; two sisters, JoAnn Orohood of Spokane, Wash. and Judy Anderson of Battle Ground, Wash. She is also survived by five grandchildren including Debra Alexander of Lakeview, Rick Sage of Moses Lake, Wash., and Rob Sage, Kevin Davis, and Scott Davis, all of Ephrata, Wash.; 11 great-grandchildren and one great great-grandchild. Gayle also leaves behind her very special niece who was like a daughter, Penny Nickel Bettenhausen of Grand Rapids, Michigan. A funeral service will be held Monday, July 21, 2014, 11 a.m. at Holy Trinity Lutheran Church, 1012 C St. SW, Ephrata, with a reception following in the fellowship hall. Interment will follow at Valley View Memorial Park in Soap Lake. In lieu of flowers, the family requests memorial be made in her name to Holy Trinity Hosanna Preschool or Team Trevor. Please express your thoughts and memories for the family at www.nicolesfuneralhome.com Arrangements are under the care of Nicoles Funeral Home of Ephrata, Wash.

The family of Gayle B. Nickel created this Life Tributes page to make it easy to share your memories.