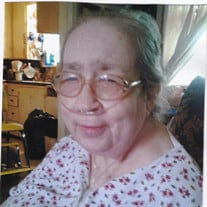 Glenda Lois McCabe passed away on March 30, 2022, at Garden Oasis Assisted Living in Ephrata, WA. She was born on October 21, 1937, to Robert E. Montgomery and Beulah M. Montgomery in Tecumseh, Oklahoma. Glenda was the third of ten children. She was married to husband Jerry L. McCabe on March 15, 1958, in Shawnee, Oklahoma till he passed away in Ephrata, WA on October 1, 2001. She and Jerry had their first son, James Robert, born on September 2, 1959, and daughter Terry Lynn, born on April 24, 1963, in Shawnee, OK. In August of 1963, they packed up and moved to Kirkland, WA so that he could pursue a career in the Aeronautics field for Boeing. On December 28, 1964, Glenda and Jerry welcomed son Richard Allen, and on January 8, 1966, they then welcomed son John Edward. Glenda and Jerry remained in Kirkland until 1971, until Jerry was laid off from Boeing. After which they went on the road looking for other job opportunities. In 1973, they returned to Washington state and purchased some land in Monroe. They resided there until 1981 where they then decided to move to Ephrata, WA. Glenda was a member of the Ephrata Eagles Auxiliary, where she was a 3-time Madam President, a Board Trustee, and a Bingo Manager. Glenda enjoyed socializing with her fellow members. Glenda was preceded in death by her parents, Robert and Beulah; as mentioned above, her husband, Jerry; sons James Robert and Richard Allen; and brother Jerry P. Montgomery. Glenda is survived by her daughter Terry (husband Tom), and son John Edward of Ephrata, WA. She is also survived by her sisters: Barbara Meador of Norman, OK; Marilyn Linduff of Hurst, TX; Vera (husband Allen) Martin of Oklahoma City, OK; Ruth Boren of Richland Hills, TX; Karen (husband Jimmy) Grundy of Oklahoma City, OK; Doris (husband Ronnie) Brockett of Ada, OK; Debra (husband Mark) of Chandler, OK, and youngest brother Robert K. (wife Anita) Montgomery of Asher, OK. She is also survived by her grandchildren: Megan (husband Drew) Hays of Ephrata, WA; Anthony Greenwalt (in the care if his mother); and Steven Greenwalt of Chandler, AZ. Grandsons: Elijah Gonzales (15) of Quincy, WA.; Zxander Williams (11) and Renin Hays (2) both of Ephrata, WA., as well as step-grandsons; Kylan (14) and Koen (7) Hays also both of Ephrata, WA. Glenda will be greatly missed by those who loved and knew her. A memorial service will be planned for the summer of 2022 through the Ephrata Eagles Lodge. All are welcomed to attend and will be informed when a date is set.

Glenda Lois McCabe passed away on March 30, 2022, at Garden Oasis Assisted Living in Ephrata, WA. She was born on October 21, 1937, to Robert E. Montgomery and Beulah M. Montgomery in Tecumseh, Oklahoma. Glenda was the third of ten children. She... View Obituary & Service Information

The family of Glenda Lois McCabe created this Life Tributes page to make it easy to share your memories.