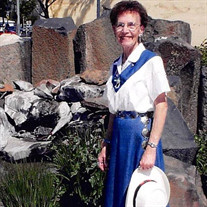 Our dear sweet mom, grandma, aunt, and friend passed away peacefully at home Tuesday, May 1, 2018 with family by her side. Dodie, 90, was born in 1927 in Wyoming to parents John and Elinor Romm. She joined a brother and three sisters on the family homestead. The family later moved from Wyoming to Burbank, Washington where she graduated from Columbia High School, Casey, Washington in 1945 at the age of 16, receiving a scholarship to WSU. Instead of heading off to college, she chose to work as a civilian at the Pasco Navy Base in support of the WWll effort. It was in Pasco, that Dodie met the love of her life, Lyle Pierce at a USO dance. After a brief courtship, they married in 1946. They lived in the Pasco area where they started their family with a daughter and two sons. In 1953, they moved their family to Ephrata, Washington. Ten years later, their family suddenly grew from five to six with the birth of another daughter and another four years later, a son would grow their family of six to seven. Dodie always bragged about having children in the Ephrata School District for 32 consecutive years. While living in Ephrata, Dodie began working for the Title company and later the Washington State Employment Security Office, where she retired after 33 years. During her life, Dodie was an active member of numerous local organizations that supported her family and community. She enjoyed her membership in the Ephrata Bowling League, Elks, Moose, VFW, Eastern Star, Red Hat Society, and her favorite, the Line Dancing Grannies, where they entertained at fairs, parades, and nursing homes since 1993. During her 58-year marriage to Lyle, they loved bowling, camping, fishing and traveling with their children. Dodie was an avid baseball fan never missing any of her children’s games, and later her voice could still be heard among the bleachers cheering on her grandchildren and great grandson. Not only did Dodie love to sit and watch a game being played, she loved to watch the Mariners on television. One of Dodie’s greatest battles in life was surviving cancer. She always said she “was too tough for the disease” and proved that by beating it five times. She will be greatly missed by her sister Shirley High of Texas; her five children, Linda (Gary) Pierson, Ephrata, Wash.; Mike (Pam Nathan) Pierce, Edgewood, Wash.; Rod (Connie) Pierce, Coulee City, Wash.; Patti (Joe) Whalen, Ephrata, Wash.; and Greg (Jennye) Pierce, Golden, Colo.; nine grandchildren; eight great-grandchildren and numerous nieces and nephews. She was preceded in death by her husband, Lyle; four sisters; one brother; and her parents. A celebration of Dodie’s life will be held at the United Methodist Church, 117 C St. NW, Ephrata, Wash. Viewing will be held starting at 12 p.m. in the Fireside Room at the church, prior to the service at 1 p.m. on Saturday, May 12, 2018. Graveside service to follow at Valley View Memorial Park in Soap Lake, Wash. In lieu of flowers, please make a donation to a charity of your choice in Dodie’s name. Please express your thoughts and memories for the family at www.nicolesfuneralhome.com. Arrangements are under the care of Nicoles Funeral Home of Ephrata, Wash.

Our dear sweet mom, grandma, aunt, and friend passed away peacefully at home Tuesday, May 1, 2018 with family by her side. Dodie, 90, was born in 1927 in Wyoming to parents John and Elinor Romm. She joined a brother and three sisters on the family... View Obituary & Service Information

The family of Helen "Dodie" Pierce created this Life Tributes page to make it easy to share your memories.