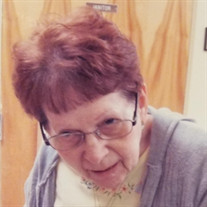 Helena DelaCruz entered into eternal rest on Monday, October 16, 2017, at McKay Healthcare & Rehabilitation Center in Soap Lake. Helena was born on October 7, 1937, in New York, NY, to parents Eugene and Mildred Butterly. She left New York and lived in Alaska and California. But it was in Hawaii, where she raised her daughter, Monika that Helena truly felt at home. She was very active in her Catholic parish in Hawaii where she was a lector and taught religious education. She left Hawaii to be closer to family after she became ill. Helena was survived by her daughter, Monika DelaCruz; her three grandchildren, Frederick, DaMesha and Lauren DelaCruz; her brother, Gene Butterly; and many nieces and nephews and friends. Helena was preceded in death by her parents, Eugene and Mildred Butterly; and siblings Joe, Gloria, John, Bob; and sister-in-law Joan. A Rosary will be said in her honor Sunday, October 22nd, at 7:00pm at St. Rose of Lima Catholic Church, 323 D St SW, Ephrata, WA. A Mass of Christian Burial will be Monday, October 23rd at 11:00 am, at St. Rose of Lima Catholic Church. Interment will be in the Ephrata Cemetery. A reception will follow at St. Rose of Lima Catholic Church. Please express your thoughts and memories for the family at www.nicolesfuneralhome.com. Arrangements are under the care of Nicoles Funeral Home of Ephrata, Wa.

The family of Helena DelaCruz created this Life Tributes page to make it easy to share your memories.