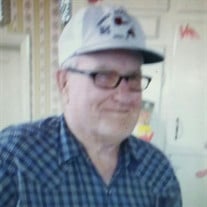 Born on the first day of the year 1937, Hank was 4th of 8 children. He spent some of his childhood in Elkhart, Kansas, and California, graduating high school in Auburn, California, to join the United States Navy, serving in a construction battalion in places like; Port Hueneme, San Diego, and Adak, Alaska. 7 children called him dad, his, hers, and theirs, and someone else's child called him Pops. He passed on his love of adventure, driving somewhere, no particular place to go, a sight to be seen, or a picnic on the tailgate. Camping was a family favorite, and often included his brothers and sisters, nieces, and nephews. Hank loved music, absolutely, as long as it was country, or bluegrass. In his teens he played in the high school band, and sang with his deep voice in the church. In his seventies, he decided to take up the banjo, and teach himself to play it. His favorited singers included the Carter family, and Jim & Jesse. Then, there were the books, probably 95 % western, and he liked to have a book to read while his wife shopped. He read a lot of books............ Hank spent most of his life as a farmer. He drove truck across the country, his greatest joy, and returned to farming, still driving that tractor, until the last couple of years. Hank is survived by his wife of nearly 58 years, Elaine (Liz), his brother, Hugh Lewis of Caliente, Nevada, his brother, Rex Lewis, of Salem, Oregon, his sister, Karen Ortega, of Belen, New Mexico, his sister, Thelma Wilson, of Boise, Idaho, his son Wyatt Lewis of Anderson, California, his son Michael Lewis of Sioux Falls, South Dakota, his son, Dale Lewis, and his daughter, Deborah (Pepper) Fugett, both of Wilson Creek, Washington, a son, Richard Smith, there are currently 16 grandchildren and 13 great-grandchildren, and numerous nieces and nephews. Henry Bruce Lewis left us by the 31st of May, 2016, to join his parents, Clifford and Thelma Lewis, sisters Lila and Patsy, brother Ron, his son James, his daughter, Pam, and his grandson, Robbie... Resting in the arms of Jesus Graveside services will be held at the Sante Fe National Cemetery in New Mexico.

Born on the first day of the year 1937, Hank was 4th of 8 children. He spent some of his childhood in Elkhart, Kansas, and California, graduating high school in Auburn, California, to join the United States Navy, serving in a construction... View Obituary & Service Information

The family of Henry "Hank" Lewis created this Life Tributes page to make it easy to share your memories.