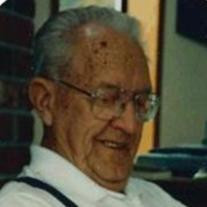 Herbert Hadley Harbeston died in Bellevue, Washington of natural causes on December 23, 2012. He was born on a farm in the Ozark Mountains of Missouri to Rebecca Smith Harbeston, age 44, and Andrew Jackson Harbeston, age 56. His mother had by that time been both widowed and divorced, and Andrew had been widowed. As both had children by a previous marriage, and a farm to tend, the marriage allowed them to cooperate on both. Thus, when Herb was born, it fell to Andrew’s 15 year old daughter by his first wife to raise Herb. She saw that he got to school, about a two mile walk, was fed, and was clean. His mother worked in the fields. His father had some standing in the community as a prosperous farmer and livestock trader. By the time Herb entered high school at Brandsville Missouri, he had grown to his father’s height of 6'3". He was the tallest player on the basketball team, and its captain the year it won the county championship. During his teens he experienced two catastrophic events. The first was a terrifying ride when a tornado lifted the family house with all in it, whirled it through the air, and smashed it against the ground. His family survived. The house didn’t. In the second event, his father sustained permanent brain damage when kicked by a horse. Despite heroic efforts by the local doctor to do brain surgery and forge a skull plate from a hammered silver dollar, the damage could not be repaired. His father was never the same, and died when Herb was 19. He left the Ozarks at the beginning of the depression, and came to Washington State to find work. To support his small family through the depths of the depression, he picked crops, herded sheep, worked on a land survey crew, pumped gas at a service station, and when World War II started, found work in a Tacoma shipyard as an electrician helping to build Liberty ships and ships of war. At the end of the war he moved his family to Soap Lake, Washington. He worked for the U.S. Bureau of Reclamation for ten years as a surveyor and concrete inspector before moving to construction projects in California, New York, South Carolina, South Dakota, and Montana. In 1975 he retired from Bechtel Engineers and moved to the home he had purchased in Soap Lake. The next twenty years he and his wife Frances traveled frequently in their trailer or motor home, often wintering in Yuma, Arizona. In 1984, with his son and daughter-in-law as guides, they took a long awaited trip to Europe. The Public Houses, or pubs, in Ireland and England were a source of pleasure, both for the Irish whiskey and the conversation. In the pubs, he said, he could talk to “working stiffs” like himself. Following the death of his wife in 1996, Herb quit traveling, but remained in his home with assistance of caretaker neighbors. He was visited by many of his family. In 2004, Herb moved to The Marymoor assisted living facility in Bellevue Washington, where he was happy to be surrounded by caring staff, and to receive friends and family. Following an illness in 2009 he required 24 hour care and was moved to the Synergy Adult Family Home in Bellevue. He lived there for three years, until he died of a heart attack and pneumonia December 23. He leaves behind his son Jack and daughter in law Edris, 10 grandchildren, 16 great grandchildren and 12 great great grandchildren. A funeral service will be held at 2 PM Saturday, December 29, at Nicoles Funeral Home, 157 C St. NW in Ephrata. It will be followed by a brief graveside ceremony at Valley View Memorial Park in Soap Lake. Please express your thoughts and memories for the family at nicolesfuneralhome.com. Arrangements are under the direction of Nicoles Funeral Home of Ephrata, WA.

Herbert Hadley Harbeston died in Bellevue, Washington of natural causes on December 23, 2012. He was born on a farm in the Ozark Mountains of Missouri to Rebecca Smith Harbeston, age 44, and Andrew Jackson Harbeston, age 56. His mother had... View Obituary & Service Information

The family of Herbert Hadley Harbeston created this Life Tributes page to make it easy to share your memories.