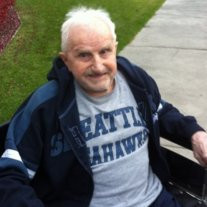 Herman Seth Johanson September 22, 1928-July 12, 2013 Herman was born in Inbyn, Sweden to Lars Joel Johansson and Amanda Henrietta Larssen. He had five years of schooling, starting at age 6, in a 2-room schoolhouse he fondly called the “University of Inbyn” with six other children – each in a different grade. He served in the Swedish army during WWII and was a certified marksman. He immigrated to the United States in 1947, traveling on the M.S. Gripsholm to New York, then by train to Everett, Washington, and finally to Mount Vernon where he worked in his uncle Swan’s shoe shop. He learned English by reading the Seattle P.I. and listening to the radio, and later taught himself to speak Spanish, Russian, French, and German. Herman met Evelyn Foster at a dance in Eugene, Oregon. He described their meeting as “love at first sight”. They were married in Idaho on September 9, 1954, and were together for 49 years prior to her death. They had six children, and enjoyed many adventures moving across the US and around the world for Herman’s jobs. They lived in Venezuela, Sweden, and over ten different western states before finally settling in Grant County, Washington. Coulee City was their home for twelve years until Herman and Evelyn bought Oasis Park in Ephrata, running the campground for two years. Upon “retirement”, Herman opened “Susie’s Super Secondhand” in Ephrata, where he delighted in acquiring and selling antiques, collectibles, and a wide assortment of second hand items. Herman often remarked that the “best word in the English language is W-O-R-K!” speaking each letter for extra emphasis. It was a philosophy he lived by his entire life. At the age of 7 he began splitting wood for the stove to help his mother. He soon went to work for a local farmer to help support the family, walking everywhere until he had saved up a month’s wages to pay for his first bicycle. Once in the States, after leaving his uncle’s shoe shop, Herman worked in the timber industry throughout the Pacific Northwest, then as a commercial fisherman. However, it was in the construction industry where Herman found his true calling. He joined the carpenters union and dedicated himself to learning all he could about the trade. For many years he spent every night taking correspondence classes in construction management, blueprint reading, and various aspects of heavy construction. After working as a construction laborer, Herman became a superintendent, and quickly made a name for himself. He earned a reputation as the “go-to-guy” if your bridge or dam project was behind schedule or over budget. Bring in “the Swede,” also known as “the whip” to his crews, and the project would finish on time and budget. Though demanding, Herman was fiercely loyal to his crew. Near the end of his career, while working on Chief Joseph dam, he was hit in the face by a crane hook and suffered 9 facial fractures. Determined to not suffer accident time for his crew and jeopardize their bonus, Herman refused treatment until the Friday whistle blew some five hours later. That Sunday, he signed himself out of the hospital against medical advice and was back at work Monday morning. Herman was a devout Christian and member of the Assembly of God congregation. He was an avid reader who began each day by studying The Good Book and the Seattle Times. He enjoyed many trips with his sons and dogs hunting for birds, deer, and elk. In his 60s he renewed his boyhood skill of cross-country skiing, even training in the summers on roller skis, with the goal of skiing in The Vasaloppet – Sweden’s famous 58 mile cross-country race. He accomplished that goal four times in his late 60s and early 70s. Herman also loved watching sports, especially his beloved Seattle Mariners, the Seattle Seahawks, and the New York Yankees. Herman passed away peacefully, attended by several of his children. He is survived by his children: Susan Delgado (Anthony); Jeanie Ping (James); John Johanson (Janel); Mary Larimer (James); Stephen Johanson (Donna); & Carol Johanson. His grandchildren: Michele Sharpes (Greg); Christina Melby (Matt); Eric Ping (Kemi); Tiffanie Ping; Jordan Ping; Joel Johanson; Sarah Squires; Zachary Johanson; David Larimer; Elizabeth Larimer; Matthew Johanson (Tiffany Burns); Jake Johanson; Caleb Bartholomew; & Joshua Johanson. His great-grandchildren: Anna, Sean, & Ryan Sharpes; Erika, Nicole, and Alexandria Melby; Michael Squires; Eric, Janey, & Elisabeth Washburn; & Matilda Johanson, expected in August. He is also survived by his brother-in-law Ake Ronnback, niece Margareta Johansson, & nephew Thomas Johansson (Evy). Herman is preceded in death by his beloved wife Evelyn, siblings Rune Johansson and Violet Ronnback, and great-grandson Isaac Sharpes. Funeral services will be held at 11 AM on Thursday, July 18th at Nicoles Funeral Home, 157 C St NW, Ephrata, WA. Interment will follow at Mold Pioneer Cemetery in Douglas County. Friends who wish may donate to MyHopeWithBillyGraham.org, or to a charity of their choice. Please express your thoughts and memories for the family at nicolesfuneralhome.com. Arrangements are under the direction of Nicoles Funeral Home of Ephrata, Wa.

The family of Herman Seth Johanson created this Life Tributes page to make it easy to share your memories.