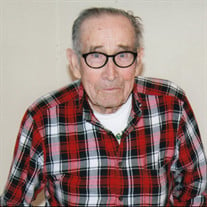 Howard William Pellham, 101, was welcomed into the kingdom of Heaven on March 12, 2019. He passed away at Columbia Basin Hospital in Ephrata, WA after his health had been failing. Howard was born in 1917 in Yonkers, Oklahoma to Corbin and Maudie Pellham. Ten brothers and three sisters joined him to make the family complete. His family moved to Inola, Oklahoma where he attended school until the sixth grade. During this time, the family all worked on the farm. The Depression forced the family to move west in 1936, and they would eventually come to reside in Rainier, Oregon. Howard married Denetta in 1944 and together they had a family of five children. They had a very productive strawberry farm in Woodland, WA. The family moved to Portland, OR so Howard could attend Multnomah Bible School. They then moved to Ashland, OR to complete his teaching degree. He spent 12 years teaching at Amboy Elementary, while pursuing postgraduate studies at the University of Portland. The family farm was sold and they moved to eastern Washington in 1974. Howard would spend the rest of his life enjoying farming alfalfa and other crops. In 1995 he married Donna after his first wife passed away. He was a pillar of the Christian faith and he was leading bible studies and preaching up into his 90s. Howard enjoyed hunting, fishing, golfing, reading, supporting missions, baseball, and serving at the local church. He loved others by humbly putting the needs of others before his own. Howard is preceded in death by his son, Merrill; wife, Denetta and second wife, Donna. Howard is survived by two brothers: Carl Pellham of St. Helens, OR and Lonnie Pellham of Longview, WA; three daughters: Sharleen Watts, Colleen Pellham, and Jeanette Pellham of Ephrata, WA; one son, Terry Pellham, of Yacolt, WA; nine grandchildren and 13 great grandchildren. A graveside service will be held at Mountain View Cemetery located in La Center, WA on Friday, March 22, 2019 at 12:00. A memorial service will be held at a later date in Ephrata, WA.

Howard William Pellham, 101, was welcomed into the kingdom of Heaven on March 12, 2019. He passed away at Columbia Basin Hospital in Ephrata, WA after his health had been failing. Howard was born in 1917 in Yonkers, Oklahoma to Corbin and Maudie... View Obituary & Service Information

The family of Howard William Pellham created this Life Tributes page to make it easy to share your memories.

Howard William Pellham, 101, was welcomed into the kingdom of...