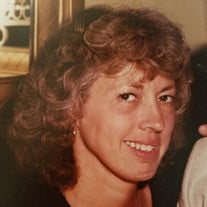 Irene Elizabeth Rincoe, 76, of Ephrata, WA passed away on August 11, 2018. Irene was born on June 26th, 1942 in Queens, NY and graduated from Richmond Hill High School. She then went on to and graduated from Browns Business School. She worked at Household Finance for a short time as a secretary, then took a job with Raymond International on Wall St. in Manhattan, NY as an Executive Secretary to the President. She met her husband Richard George Rincoe at a YMCA dance and was engaged a week later. She eventually left her job on Wall St. when she became pregnant with her daughter Dawn Elizabeth. Soon another baby followed, her son David Scott. In addition to her tasks taking care of two young children Irene enjoyed baking and sewing. She won many champion and grand champion ribbons in county fairs in the places that she lived for her bread, cookies, crocheting and needlepoint work. Her most recent grand champion ribbon was won several years ago in the Grant County Fair for her needlepoint of two horses running by the ocean. Irene always loved children and helping people. When her children were in school she volunteered as a Home Room Mother and as a Cub Scout Leader until she had an acoustic neuroma brain tumor. Later, when she was well and when her children were older, she volunteered at Lutheran Medical Center in Arvada, CO as a Pink Lady and they like her so much that they offered her a job! More interested in working a day shift, she then applied for a job working for an Orthopaedic Surgeon as his Medical Assistant and continued with Dr. Robinson until she retired after 25 years. Dr. Robinson reported that years after she had left patients continued to remember and miss her because she had treated them with such kindness and compassion. She then moved to Ephrata, WA with her husband to retire and be near her daughter. Being the busy person that she was, she found that she felt compelled to look for work again and took a position at the Moses Lake Clinic for 8 years until she retired for the last time. During all of these years she enjoyed travelling with her husband, family and friends. She travelled all over the U.S. with her husband and children on business trips when her kids were young. When she no longer had children at home she and her husband took many cruises to places like St. Martin, Puerto Rico, Barbados, Mexico, Hawaii and Alaska. She also travelled with her sister Joan to Poland to visit the towns of her ancestors. Later she and her husband purchased a motorhome and toured the western U.S., Canada and Alaska. When she no longer could travel she enjoyed being at her dream home in Ephrata and doing gardening with her husband, and volunteer work at her church. Irene loved her family and also enjoyed time with her daughter, granddaughter and great-grand daughter. Irene is survived by her husband Richard, her daughter Dawn, her granddaughter Jessica and her great-granddaughter Kira. She was preceded in death by her parents Irene Elizabeth Parslow and Edmund Thomas Nash, as well as her son David Scott Rincoe. Her Memorial will be held on August 25, 2018 at Noon at the Church of Jesus Christ of Latter Day Saints in Ephrata at 1301 E. Division Ave. Please express your thoughts and memories for the family at www.nicolesfuneralhome.com. Funeral arrangements are being handled by the Nicoles Funeral Home.

The family of Irene Elizabeth Rincoe created this Life Tributes page to make it easy to share your memories.

Irene Elizabeth Rincoe, 76, of Ephrata, WA passed away on August...