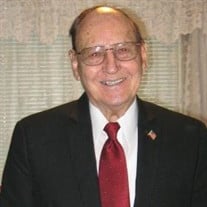 Jack James Park, born July 7th 1926 at the age of 92, and longtime resident of Ephrata (1950-present), peacefully passed away Saturday, March 2, 2019. Born in Tulsa, OK to John & Helen Park, he was the second youngest of 7 siblings, Ethel, Ernie, Marie, Nan, Doris and Margorie. In 1933, during the tough Great Depression, the family loaded up and moved to Washington in hopes that President Roosevelt would successfully end the depression and get most people back working again. Jack likened their journey to the movie “The Grapes of Wrath”. The family first lived and worked on a small farm near Maltby, WA not far from Woodinville and later moved to Snohomish. In school, he learned and developed interests in drawing, drafting, and reading blueprints. In 1943, when he was 17 and only 115 pounds, he enlisted in the Navy. He expressed his passion for guns and airplanes to the recruiting officers and was assigned as an aviation ordinance man. At the end of WW II he was honorably discharged from the Navy and returned home to his family in Washington. He soon found work at Columbia Basin Irrigation District working for the Bureau of Reclamation in Ephrata then later at Grant County PUD (1953-1980). His job titles over the years included Surveyor, Engineering Drafting Supervisor, and Public Affairs Officer. Jack loved art & archeology and was instrumental in preserving the wonderful history of the area during the construction of Priest Rapids and Wanapum dams. He enjoyed a great working relationship with the Wanapum Tribe. He was given responsibility to head-up exhibits at the first Wanapum Heritage Center. He was instrumental in starting Granco Federal Credit Union. Jack, being the entrepreneur he was, and dear wife Lillian began several businesses in the Ephrata area including Hobby House, Western Collectors Gun Shows, Western Collectors Gun and Pawn Shop, J&L Art Source/Frame Shop, and Jack Park Appraisal Services for firearms, military and western paraphernalia, coins, western art and Indian artifacts. Jack met the love of his life, Lillian Hope, in Quincy and was married December 16th, 1951 in the ERC Building. They began raising a family with the birth of their twin boys, Clayton and Clinton, daughter Debbie, and son Evan. Jack was a dedicated husband and exceptional father. He and Lillian were wonderful, loving, diplomatic parents to their children and grandchildren. They were both dedicated members of the Church of Jesus Christ of Latter Day Saints and held several positions within it. Jack served in the Bishopric, Sunday School presidency, and was a Scoutmaster during his membership. Jack loved history, enjoyed traveling and truly loved his community. He did public speaking about various topics, served in the Historical Society and many other community groups. He loved people and enjoyed sharing his many interesting stories with them. Jack was preceded in death by his wife Lillian, his parents, and all siblings except sister Marie (97) who currently resides in Tacoma. Jack is survived by sons Clayton Park of Ephrata, Clint Park of Wenatchee, daughter Debbie (Dan) Harper of Ephrata, and son Evan (Alicia) of Chula Vista, CA, seven grandchildren, six step-grandchildren, twelve great grandchildren and many nieces and nephews. Funeral Services: Saturday, March 16th, 10:00am with viewing 9:30–9:55am. Address: Church of Jesus Christ of Latter Day Saints, 1301 East Division Ave, Ephrata. Burial: Ephrata Cemetery to follow. Please express your thoughts and memories while visiting the online guestbook at nicolesfuneralhome.com. Arrangements are under the direction of Nicoles Funeral Home of Ephrata.

The family of Jack James Park created this Life Tributes page to make it easy to share your memories.