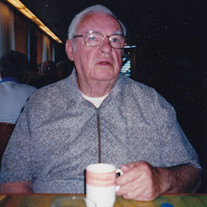 On Thursday, February 2, 2017, Jack Theadore Scott, 90, died peacefully in his home in the presence of his wife and family in Soap Lake, Washington after many unsuccessful treatments of dialysis. Jack was born in Bismark, ND on September 12, 1926 and moved to Washington State with his parents when he was 10 years old. He was the youngest of three children. Shortly after graduating from Bothell High School, Jack enlisted with the U.S. Navy as a seaman. During his career in the Navy, he fought in World War II and retired after 22 long years of dedicated service. Jack was married to Marnella (Ward) and on November 6, 2016 they celebrated their 70th wedding anniversary. Jack was very social and made many life-long friends through his state-wide travel adventures with Marnella. He loved playing bridge, fishing and singing with his fellow barbershop quarteters. He is survived by his wife Marnella (Ward); two daughters, Victoria “Vicki Jo” Dobesh and Debbie (Ron) Mahler;seven grandchildren, Marshall Mahler, Antesha Esteves, Paul Mahler, Arthur "Fields" Schumann, Eric, Aimee and Brittany Scott; and his 10 great-grandchildren. Jack was preceded in death by his father and mother, Jack W. Scott and Helen M. Scott (Moorehead); sisters, Maxine Barrett and Louise Smith; and his beloved son and last born child Richard Theadore Scott, who died in 2015. A celebration of his life will be held on Saturday, February 18, 2017 at 2:00 p.m at the American Legion, Post 28, 276 8th Ave NW, Ephrata, WA 98823. A graveside service will be held later this spring with military honors at the National Veterans Cemetery. If you would like to attend, please contact Victoria or the family. Please express your thoughts and memories for the family at www.nicolesfuneralhome.com. Arrangements are under the care of Nicoles Funeral Home of Ephrata, WA.

On Thursday, February 2, 2017, Jack Theadore Scott, 90, died peacefully in his home in the presence of his wife and family in Soap Lake, Washington after many unsuccessful treatments of dialysis. Jack was born in Bismark, ND on September 12,... View Obituary & Service Information

The family of Jack T. Scott created this Life Tributes page to make it easy to share your memories.