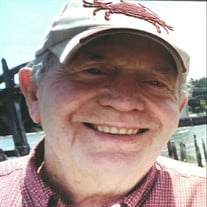 Jerald “Jerry” Lindgreen After enduring many lasting challenges to his health, Jerry, 80, peacefully passed from this life on May 29th, 2020 at his Ephrata, Washington home. Born in his parent’s home in San Dimas , CA., Dec. 9th, 1939, he was the 6th of six children born to Levi and Pearl Marie (McMullen) Lindgreen. He had fond memories of his childhood and youth in San Diego. In recent years he learned of his dyslexia, which wasn’t diagnosed back then, and realized it was what had made some of his school days so daunting. In his lifetime he never did read a book for pleasure. As a high school senior, he enlisted in a U.S. Army program that required six months of active duty, followed by seven years in the Reserves. He began working before graduation from Kearny High School. In Wenatchee, he spent 20 years driving trucks for Eagle Transfer, earning recognition for being a safe driver; was a realtor at the former Zitting’s Realty; then sold and serviced office machines for Nelson’s Office Machines. His last employment before retirement was in copier repair at Sequim, WA. Jerry had an innate gift for finding the cause of an item needing repair, and subsequently making it as good as new – or even better! He taught his son, Jon a strong work ethic by his example. After a divorce, he gained custody of Jon, his only child, bringing him to Wenatchee in 1968. His deepest sadness came when Jon, 29, died in an East Wenatchee excavation accident in 1994. Following unsuccessful marriages, he met Marcy Ising in Wenatchee, marrying her on June 1st, 1991 in the Linden Tree Area on the Columbia River. Their marriage was sealed two years later in the Seattle Temple of The Church of Jesus Christ of Latter-day Saints. Although he had earlier enjoyed hunting, he gave it up for fishing after looking into the eyes of downed bear. As he and Marcy lived in Sequim, he enjoyed catching Dungeness crab along with continuing fishing on the river. In 2010, he and Marcy sold their home, moved into their fifth wheel trailer and lived a mobile life until settling in Ephrata two years ago, still in a RV. Jerry’s semi-truck driving experience served him well, driving through western states and large cities without incident. Jerry, who didn’t care to fly, was able to visit many new places, including Bryce Canyon, Utah, his favorite. They spent eight winters in little Beaver Dam, AZ, finding they could enjoy desert life too. He is survived by his wife Marcy, his grandchildren; Levi Lindgreen and Rayanna Lindgreen Messina of California; his sister, Loreen Holt; his stepchildren, Robin (Alex) Siddiqui, Kristen Ising, Trey (Jessica) Ising, and Kirk (Kristen) Ising. 19 grandchildren, plus two great–grandchildren. He was preceded in death by his son, a granddaughter, his siblings; Arlene Young, Jack Lindgreen, Sarah “Dene” Lamb and Nola Evans. Please express your thoughts and memories for the family at www.nicolefuneralhome.com. Arrangements are under the care of Nicoles Funeral Home of Ephrata.

The family of Jerald Jon Lindgreen created this Life Tributes page to make it easy to share your memories.

After enduring many lasting challenges...