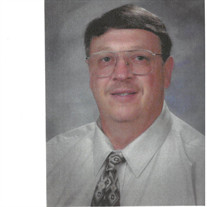 Jerry Simon died on the evening of August 1, 2020 after a difficult battle with pancreatic cancer. He died in his house surrounded by his wife, Cathy and his three sons, Daniel, Patrick, and Christopher. He took his last breath as his wife prayed to Jesus Christ for him, as a single tear rolled down his right eye. His last words were a faint “I know”, that same morning, when his boys told him that they loved him. Jerry was born in Bozeman, MT to Dale and Dorothy Simon. He grew up in Tekoa, WA. He received a BS in Agricultural Education in 1978 from Washington State University, an MS in Vocational-Technical Education in 1986 from Washington State University, and a Ph.D. in Education in 1991 from the University of Minnesota. While in Minnesota, he met his loving wife, Cathy. They moved to Washington shortly after they were married. His career in education included being a teacher, principal, and superintendent for 40 years. Jerry taught at Conrad, MT, Royal City, WA, worked at Office of Public Instruction in Olympia, as principal and superintendent in Rosalia, WA School District, and retired in 2018 after 21 years as a superintendent in Ephrata. His philosophy was “to work as a team” and was proud to serve in the school districts and communities. Jerry’s favorite sport was basketball. He played for two years at Spokane Community College and coached high school for a total of seven years in Conrad and Royal City. Jerry enjoyed watching his kids play sports and was their biggest supporter. He coached his three son’s AAU basketball teams for a total of 6 years. Anyone who knew Jerry knows that he was an avid fly fisherman, a skill he loved teaching his sons. Other passions of Jerry included woodworking, hunting, and cooking. Jerry and his wife Cathy loved taking scenic drives in the mountains of Idaho and spent the majority of their summers at their family cabin, that he built with his family. As a strong believer in Jesus Christ, Jerry was adamant about his faith and loved sharing it with others. He is survived by his wife of 31 years and his sons; Daniel (30), Patrick (28), and Christopher (25); his mother, 3 brothers, and 3 sisters. He is preceded in death by his father, Dale Simon. A private gravesite service will be held at Goldenrod Cemetery in Tekoa, WA on August 14, officiated by Pastor Rory Lewellyn. You are welcome to express thoughts and memories for the family at www.nicolesfuneralhome.com. An online video/slideshow will be posted a few days after the service.

Jerry Simon died on the evening of August 1, 2020 after a difficult battle with pancreatic cancer. He died in his house surrounded by his wife, Cathy and his three sons, Daniel, Patrick, and Christopher. He took his last breath as his wife prayed... View Obituary & Service Information

The family of Jerry K Simon created this Life Tributes page to make it easy to share your memories.

Jerry Simon died on the evening of August 1, 2020 after a difficult...