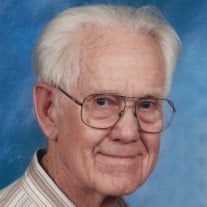 Retired Grant County Engineer, John Edgar Gonseth, 88, went to be with the Lord on Friday, April 4, 2014 at Columbia Basin Hospital, North Wing. He was born on November 23, 1925 in Clayton, NY to John G. and Bertha (Nellis) Gonseth where he joined older sister Louise and his twin Jane. He served in the Army Air Corps. during WWII, upon discharge he attended Clarkson College of Technology, graduating with a Bachelor of Civil Engineering in 1949. After college, John came west to work on the canal projects and made his home and family in Ephrata. John invited Mary Lou to the touring stage play “Mr. Roberts” and about a year later on June 10, 1955 they were married. They made their home in Ephrata where Mary Lou still lives today. John and Mary Lou raised two sons; Frank of Ridgecrest, CA; and Paul of Selah, WA. John worked for the Bureau of Reclamation, the City of Ephrata, and Grant County Public Works as a Civil Engineer until his retirement in 1983. John enjoyed duck hunting, camping, and in retirement he and Mary Lou enjoyed visiting our western National Parks, the various parks of the red rock south west and the Pacific coast. Over the years John was a member of the American Legion, B.P.O.E., Rotary Club, Kiwanis Club, Ephrata Volunteer Fire Dept. and Holy Trinity Lutheran Church. John was preceded in death by his parents and sisters. Survivors include Mary Lou, Frank Gonseth, Paul (Holly) Gonseth and their children Patrick Gonseth of Yakima and Emily Gonseth of Las Vegas, NV. A memorial service will be held at 11:00 a.m. on Friday, April 11, at Holy Trinity Lutheran Church, Ephrata, WA. Donations in John’s memory may be made to the Columbia Basin Hospital Foundation or Holy Trinity Lutheran Church or the charity of your choice. Please express your thoughts and memories for the family at www.nicolesfuneralhome.com. Arrangements are under the care of Nicoles Funeral Home of Ephrata, WA.

Retired Grant County Engineer, John Edgar Gonseth, 88, went to be with the Lord on Friday, April 4, 2014 at Columbia Basin Hospital, North Wing. He was born on November 23, 1925 in Clayton, NY to John G. and Bertha (Nellis) Gonseth where he... View Obituary & Service Information

The family of John Edgar Gonseth created this Life Tributes page to make it easy to share your memories.