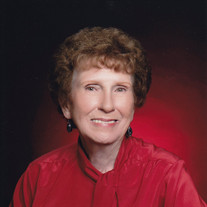 Julia “Judy” Norris Judy, 85, of Ephrata, WA, passed away at her home on Sunday, July 20, 2014. She was born May 18, 1929 in Hill City, Kansas to Phillip and Rosalie Frigon and was the youngest of nine children. Judy married Deane Norris on May 29, 1953 in Wichita, Kansas and together they raised two children a son Harmon; and a daughter, Paula. She also has a stepdaughter, Sherry Allen, Dean’s daughter from a previous marriage. Judy and Deane worked for Boeing at the Wichita plant and in the early sixties transferred to California where they worked for Lockheed at Vandenberg Air Force Base. They both worked on the Minuteman missile program; Deane as a missile inspector and Judy as the secretary to the base commander. Judy loved to travel and fulfilled her lifelong dream several years ago by traveling to Rome and seeing the Vatican, many cathedrals, and other sights. Her greatest joy was her family and she was happiest when surrounded by her grandchildren and great-grandchildren. Judy is survived by her brother, Philip (Shirley) Frigon, daughter Paula (Jeff) Gray, Step-daughter, Sherry (Art) Allen, 8 grandchildren, and 15 great-grandchildren. Judy was preceded in death by her parents, 4 sisters, 3 brothers, husband, son, and twin grandsons. Holy Rosary will be held at 7pm on Thursday, July 24, 2014 at St. Rose of Lima Catholic Church, 323 D St. S.W.,Ephrata. The Mass of Christian Burial will begin at 1pm on Friday, July 25, 2014 at St. Rose of Lima with graveside to follow at the Ephrata Catholic Cemetery. Please express your thoughts and memories for the family at www.nicolesfuneralhome.com. Arrangements are under the care of Nicoles Funeral Home of Ephrata, WA.

The family of Julia "Judy" Norris created this Life Tributes page to make it easy to share your memories.