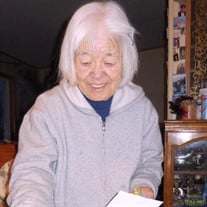 Katsuko Higa Spurbeck was born In Ewa, HI March 19, 1925 to Kamjin and Yoshi Higa. Katsuko moved with her family to their homeland of Okinawa, Japan at the age of four. During WWII Okinawa was invaded by the American military. Katsuko remembered seeing so many American ships she could not see the water in the ocean. Katsuko’s family took refuge in a cave during the invasion which lasted several months. Living conditions were horrible with little food and water; however, the entire family survived the war. After the war Katsuko met handsome US Navy officer Sid Spurbeck. Sid promised he would show her the world. They married and Sid kept his promise as the couple moved to Norfolk, VA; Corpus Christi, TX and San Diego, CA before settling in Soap Lake, WA in 1957. Upon his retirement from the Navy, Sid accepted a pilot position with Saudi Arabian Airlines and relocated to Jedda, Saudi Arabia. In 1958 Katsuko and her children joined Sid. While living in Jedda the family enjoyed vacations in Europe, Africa and the Far East before returning to Soap Lake in 1964. Katsuko loved working in her garden, growing vegetables and roses. She enjoyed watching western and scary movies but mostly loved being with her family. She was one of the most gracious and generous people in the world, welcoming everyone into her home. She is beloved and will be missed by us all. Katsuko went home to be with her Lord and savior on September 16, 2015. Preceded in death by her husband, Katsuko is survived by her sons Chuck, Dewey and Joe of Soap Lake; Chris (Kris) of DuPont, WA; Matthew (Jeanie) of Wenatchee, WA and daughter Bonnie (Ken) of Milton-Freewater, OR. She is also survived by her sisters Okiyo and Mitsuye and brother Isao of Japan, eight grandchildren and five great-grandchildren. The family extends a special thank you to Darla Forgette who provided care, humor and friendship to our mother during her final months. A memorial service for Katsuko will be held at the First Baptist Church in Soap Lake, WA Saturday, November 7, 2015 at 1pm.

Katsuko Higa Spurbeck was born In Ewa, HI March 19, 1925 to Kamjin and Yoshi Higa. Katsuko moved with her family to their homeland of Okinawa, Japan at the age of four. During WWII Okinawa was invaded by the American military. Katsuko remembered seeing... View Obituary & Service Information

The family of Katsuko Spurbeck created this Life Tributes page to make it easy to share your memories.