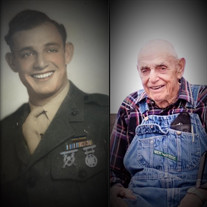 This is the legacy of a man who: Simply loved life…loved hard work...loved long days...loved flying, fishing and hunting…running equipment, going to auctions and making a deal…rebuilding and repairing equipment…had a unique appreciation for and loved to hug the women (with a ‘Larry Sr hug’…)….he treasured coffee breaks with friends...and in his later years; he loved puttering for hours at a time, and the list could go on and on…..! He had the ability to go from screaming to crying, and apologizing all in one breath….! To many he was truly and simply ‘a’ character… Inside he was a man ‘of’ true and simple character. He drove himself around town for far longer than he should have…his sense of go…go…going never stopped even in the end. That’s just a little about the man, Lawrence Arthur Tommer Sr., who ran an amazing race for 95 years and crossed his finish line November 11, 2015 at Columbia Basin Hospital in Ephrata, WA. Larry’s life began in Waterville, Kansas Sept 13, 1920, born to John Isadore and Amelia Eva (Forst). He left home at 17, beginning his legacy of hard work and his commitment to our country as a Marine in Santa Barbara, CA in the early 1940’s. He met the love of his life, Katherine Sophie Johnson, who also was a Marine, actually his Sargent! They were married in Santa Barbara, July 1945, and had their first son there, Lawrence Jr. (Larry Jr.) born on June 30, 1946, followed by their second son, Nicholas (Nick) born in Bellingham on April 29, 1950. In 1959 the family moved to Ocean Shores, which was the beginning of Tommer Construction and in 1968 left the wet coastal weather after falling for the ‘dry weather’ of Ephrata. Larry was a master mechanic, a master equipment operator, a pilot, electrician, TV repairman, a logger. He was not satisfied with being just 'good' at anything, he worked hard to become a master of everything he did, to the best of his ability. To his sister Imogene, he was “the best big brother ever, and was always good to his 2 younger sisters.” He taught his grandkids about hard work and to simply live life to the fullest. He was also the best hunting partner ever, according to Susie, and loved to make you laugh and give you ‘love pinches’ all day long. He is survived by his younger sister Imogene Roepke of Hoquiam, WA; his son Larry Jr. of Montana, Larry’s daughter's; Shannon (& Steve Ramsey), Winters, CA, Michelle, Cristine of Wenatchee, WA, Sherrie of Winters, CA and Susie (& Josh Blair) of Montana; his second son and daughter-in-law Nick and Donna of Ephrata, his children Christopher of Ephrata and Jada Molitor (& Dan) of Ephrata; 10 great grandchildren and numerous nieces and nephews. He is preceded in death by his loving wife Kay in 1999, his parent’s John & Amelia, and his younger sister, Katy. We want to express our appreciation to the group of caretakers (Linda, Kirk, James and his nephew Randall) who took excellent care of him and made it possible for him to remain in the comforts of his home. And to the wonderful staff at Columbia Basin Hospital who kept him comfortable and cared for him professionally and thoughtfully, the last few days of his life. Services will be held at the St. Rose of Lima Catholic Church at 11am on Wednesday, November 18th with a reception immediately following and Graveside Services at 2pm at Lakeview Cemetery in Soap Lake, WA. All are welcome to join the family at 1590 Alder NW, Ephrata (Sr's residence) for continued celebration and reminiscing. In lieu of flowers, donations may be made to Columbia Basin Hospital in honor of Larry Tommer Sr.

This is the legacy of a man who: Simply loved life&#8230;loved hard work...loved long days...loved flying, fishing and hunting&#8230;running... View Obituary & Service Information

The family of Larry Arthur Tommer Sr created this Life Tributes page to make it easy to share your memories.

This is the legacy of a man who: Simply loved life…loved hard...