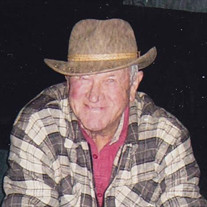 Leo “Allan” Greenhalgh, 86, of Soap Lake, Wa passed away on Sunday, August 31, 2014. He was born on September 11, 1927 to George and Nellie Greenhalgh in Junction, Utah. Allan was an avid fisherman who taught this love to others. He served in the Navy, trained horses, and became a pilot at the age of 55. Together with his wife, Anne, he owned and operated multiple restaurants. He is survived by his wife Anne; children: Randy, Gloria, Curtis, Anita, Cyndi, Robyn , and their spouses; grandchildren: Jeffrey, Jason, Garrett, Travis, Jessica, Raymond, Melissa, Derek, Meranda, Robert, Cody, Paige, and Myles; and 19 great-grandchildren. Allen was preceded in death by his eldest son Thomas and great-grand daughter, Paislee. Graveside services were held at Valley View Memorial Park in Soap Lake, WA. In lieu of flowers, please donate to Alzheimer’s Research at http://www.alzfdn.org/ContributetoAFA/makeadonation.html Please express your thoughts and memories for the family at www.nicolesfuneralhome.com Arrangements are under the care of Nicoles Funeral Home of Ephrata, WA.

The family of Leo Allan Greenhalgh created this Life Tributes page to make it easy to share your memories.