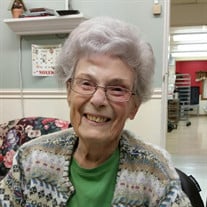 Lilian Rosetta Loomis, 93, of Ephrata, Washington, passed away on Monday, October 24, 2016 at McKay Healthcare in Soap Lake, Washington. She was born to Alfred and Lilian Knott of London, England on November 2, 1922, All Souls day. The oldest of five she grew up and survived WWII. Following her heart, she moved to Canada with her first husband Albert Doe. They had two children, John and Leslie. Unfortunately, several years after immigrating down to America and becoming citizens, Albert passed away in a plane accident during a search and rescue mission. Within the next two years she met and married Ben Loomis. Together they had two more children, Michelle and Mike. Lee was a kind, funny and loving person. Her most prized possessions were her children, grandchildren, and great-grandchildren. She would often tell her grandchildren to be good because she had her spies out watching them. She enjoyed a good cup of tea and a nice glass of Scotch and 7-Up! Lee had many adventures and stories that kept her family and friends in awe of her life, strength and fortitude to, “Keep Calm and Carry On.” She is survived by a sister and brother in England; three children, Lesley (Tim), Michelle (Matt), Mike (Juanita); nine grandchildren; and 11 great-grandchildren. She was preceded in death by her husbands Albert and Ben; her son John; and brother Alfie. She will be greatly missed. Recital of the Holy Rosary will be at 8 p.m. on Tuesday, Nov. 1, 2016 at St. Rose of Lima Catholic Church, 323 D St. SW in Ephrata. The Funeral Mass will be held at 1 p.m. on Wednesday, Nov. 2, 2016 also at St. Rose of Lima Catholic Church with graveside service to follow at the Ephrata Catholic Cemetery. Please express your thoughts and memories for the family at www.nicolesfuneralhome.com. Arrangements are being handled by Nicoles Funeral Home in Ephrata.

Lilian Rosetta Loomis, 93, of Ephrata, Washington, passed away on Monday, October 24, 2016 at McKay Healthcare in Soap Lake, Washington. She was born to Alfred and Lilian Knott of London, England on November 2, 1922, All Souls day. The oldest... View Obituary & Service Information

The family of Lilian Rosetta Loomis created this Life Tributes page to make it easy to share your memories.