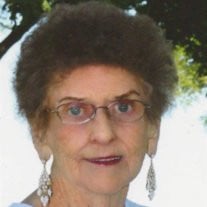 Lorna Emily (Rose) Bolyard passed away on July 19, 2013 in Moses Lake, Washington at the age of 93. Lorna was born in Warragul, Australia on June 26, 1920 to John Rose and Louisa (White) Rose. She had teo sisters (Ilene and Bertha), one brother (Frederick), step-brother Stan, and step-sisters Jewell and Violet. Lorna is preceded in death by her dear husband Buster. She is survived by their only daughter, Judith; their grandchildren Sage, Crystal, and Jazz; and great grandchildren Talisa, Thaddeus, Sky, and Rose. She also leaves behind her sister and brother, and many nieces, and nephews, both in Washington and in Australia. With an abundance of love and an adoration of many they met, Lorna and Buster were also unofficially adopted by many people they came across. When Lorna met her future husband Buster while he was in Australia, it was love at first site. They became engaged in 1943, and continued a long distance relationship until she was able to enter the United States in 1946. The two were married in Coulee City just a few days after she arrived. On March 16, 1954, Lorna became a naturalized citizen of the United States, something she took great pride in. But despite spending most of her life in Washington, she never completely lost her accent. Lorna and Buster made their home near Coulee City, Washington on a small wheat farm where Buster did his dry land farming. Years later they bought property in Cascade Valley and built a little farm as Buster began working for Grant County. After Buster’s passing in 1999 after over 50 years of marriage, Lorna sold the house and moved into town. Lorna worked for many years at the Porterhouse Restaurant and Hallmark Inn. She was an active member of her community, always getting involved with different organizations and events. She was a member of the Desert Reds (the local Red Hat Society), and was a member of the Moses Lake St Martin’s Episcopal Church. She loved to play Bunko, cook, and socialize. Pageants were always an interest and passion for Lorna. Her father was actively involved with pageants when she was a child, and she won the title of Miss Hotel Australia in 1945. Carrying her passion with her when she came to the U.S., Lorna and a friend organized the Miss Moses Lake Scholarship Pageant in 1960. The pageant was started for the Moses Lake Yacht Club, and Lorna served as Judges’ Chair for the Pageant. She was also an active member of the Miss Washington Pageant, and was heavily involved with several local Jr. Miss Scholarship Programs (now Distinguished Young Women) and the Mrs. Washington America Pageant. She and Buster were members of the original Miss Moses Lake Float and Festival Committee, building floats and travelling to other communities with local queens and princesses. Lorna mentored and judged many young women, helping them with their interviews, their walks, talent, and poise. The special training she provided, along with her passion, helped contribute to many young women receiving thousands of dollars in scholarships. Lorna was always so proud of the girls she worked with, maintaining relationships throughout the years and expressing her pride in the accomplishments of all her girls. Attending a Miss America Pageant in Atlantic City was a highlight of her life, as well as chaperoning a Miss Moses Lake to Yonazawa, Japan, Moses Lake’s Sister City. Lorna also served on the Sister City board. One of Lorna’s proudest moments came when she was honored as the first Ms. Washington Senior 2006. Lorna was loved by all who met her, and she will be dearly missed. Per Lorna’s request, there will be no funeral service. We invite all of her friends and family to share their memories about Lorna on her tribute page at NicolesFuneralHome.com.

Lorna Emily (Rose) Bolyard passed away on July 19, 2013 in Moses Lake, Washington at the age of 93. Lorna was born in Warragul, Australia on June 26, 1920 to John Rose and Louisa (White) Rose. She had teo sisters (Ilene and Bertha), one brother... View Obituary & Service Information

The family of Lorna Emily Bolyard created this Life Tributes page to make it easy to share your memories.