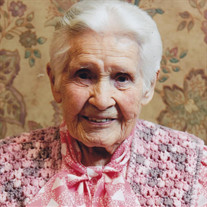 Louise M. (La Rue) Moore was born Sep. 20, 1912 at Winthrop, Washington on the homestead farm of Charles and Anna Zemke LaRue, well known beekeeper and honey producer of North Central Wash. She attended school at Cub Creek for four years and transferred to Winthrop School when the family moved to town, graduating from Winthrop High School in 1929. She attended College of Puget Sound in 1930-32. On August 2, 1932 she married the Rev. James A. Moore, and the couple moved to Anacortes where James Moore served as the Methodist minister. In 1934 they were assigned to Parkland, Wa. Methodist Church and Louise was able to complete her degree at the College of Puget Sound in 1936. She accompanied her husband to New Jersey in 1936 where he attended Theological Seminary. In 1939 they returned to Washington State, where James continued to serve as minister with the Methodist Church, living in Chelan, South Spokane, Chewelah, Omak, North Spokane, and Cashmere. In 1971 she and her husband retired to the Blue Lake Moore homestead property. Following the death of her husband, James Moore on June 4,1988, Louise moved from the Blue Lake Moore homestead property in 1992. She resided at Wesley Gardens in Des Moines, Washington until 1996. In 1996 she moved to Rockwood Manor in Spokane, Washington. Louise enjoyed gardening, family gatherings, church attendance, community service, crocheting and sewing, local history and reading. Louise is preceded in death by her 6 siblings, husband, James Moore and eldest daughter, Anita Jackson-Moore. She is survived by her son, James Moore, daughters, Marilyn F. Sarber and Bonnie J Hembd, 9 grandchildren and 17 great grandchildren with two more due this spring. Louise passed from this life January 21, 2015 at the age of 102. Funeral services will be held at 11a.m. on Friday, January 30, 2015 at the United Methodist Church, 117 C St. N.W., Ephrata, Wa with luncheon to follow at the church. Please express your thoughts and memories for the family at www.nicolesfuneralhome.com. Arrangements are under the care of Nicoles Funeral Home of Ephrata, Wa.

The family of Louise M Moore created this Life Tributes page to make it easy to share your memories.