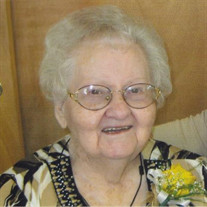 Louise Margaret Roberts, 94, of Coulee City passed away at Coulee Medical Center Extended Care in Grand Coulee, Washington on Wednesday, January 4, 2017. She was born on April 15, 1922 in Douglas, Washington to Peter and Alvina Brandt. Louise graduated from Waterville High School. She married the love of her life Marion Eugene (Gene) Roberts on May 15, 1947 at the Lutheran Church in Douglas, Washington. Together they raised their five children; Barbara, Bonnie, Peggy, Don, and Darrell. Throughout her life, Louise helped run the farm. She took part in the Grammas Club, Women’s Club, St. Andrews Grange, and Area Agency on Aging. She was also the president of the Coulee City Senior Center and a cook there for 13 years. Louise was named Coulee City Senior Citizen of the year twice because of her dedication to the Senior Center. Louise was always invited to the Evan’s family functions and felt a part of their family. The family wishes to extend a special thank you to Judy Harwell for her comfort and care over the last few years. Louise is survived by her daughters Barbara and her husband Larry Richardson of Waterville; Bonnie Davis of Florence, Oregon; and Peggy Dale of Federal Way; her sons Don Roberts and his wife, Dianne of Coulee City, and Darrell Roberts and his wife Debbie of Harrington; 10 grandchildren; 26 great grandchildren and 6 great great grandchildren. She was preceded in death by her husband Gene in 1966, her parents, her five brothers and four sisters, and her son-in-law, Roger Dale. Louise was the last of her generation on either side of her generation. In lieu of flowers, donations could be made in her name to the Coulee City Senior Center, Coulee City Ambulance, or the Coulee City First Presbyterian Church. A graveside service will be held at 10 a.m. at Valley View Memorial Park in Soap Lake on Monday, January 16, 2017. A memorial service will follow at the First Presbyterian Church in Coulee City at 11:30 a.m. with a reception to follow. Please express your thoughts and memories for the family at www.nicolesfuneralhome.com. Arrangements are under the care of Nicoles Funeral Home of Ephrata.

The family of Louise Margaret Roberts created this Life Tributes page to make it easy to share your memories.

Louise Margaret Roberts, 94, of Coulee City passed away at Coulee...