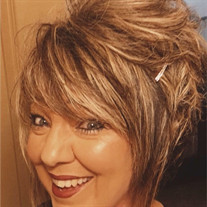 Lynn M. Giraud, 51, of Quincy/Wenatchee, WA passed away 9/19/2018 in Wenatchee. Lynn was born 4/01/1967 in Goldendale, WA to her parents John Henderson and Nancy Henderson. She was eldest of their three children. Her siblings are Dawn Henderson/De Leon of Soap Lake, WA and Robert Henderson of Kalama, WA. During her youth, Lynn accompanied her father to many different locations and states due to his career as a railroad laborer. She attended her last portion of school in Lyle, WA where she began her journey as a mother. Later in life, Lynn and her 3 children, Lisa Henderson/Pearl of Ephrata, WA, Justin Winningham of Quincy, WA and Katherine Moore/Carlson of Ephrata, WA moved to Quincy in 1998 where she met and married her husband Sean Giraud and his son, Trase Giraud. It was there that they raised their children together and watched them grow families of their own. She is survived by her husband, siblings, children, nieces/ nephews and her six beautiful grandbabies: Dakota McAfee (Lisa's), Jayda Winningham and Mazee Winningham (Justin's), Rhylee Carlson, Coal Carlson and Oaklynn Palmen (Katherine's). Lynn was an infectious soul who was loved by all. She touched many hearts, in many communities while tackling her career goals in management. Lynn was career driven however, many of her true passions were: fishing with her family, motocross with her grandson, her pets, wheeling in the mountains and the ocean. She adored spending time with her children, siblings and watching her grandbabies succeed. A casual celebration of life will be held in Quincy, WA on Sun Oct 21st at the Van Dyke Business Center. 124 D ST SW Quincy, WA 98848. Come anytime in between 10am-1pm to share your fondest memories of Lynn. Please express your thoughts and memories for the family at www.nicolesfuneralhome.com. Arrangements are under the care of Nicoles Funeral Home of Ephrata, WA.

Lynn M. Giraud, 51, of Quincy/Wenatchee, WA passed away 9/19/2018 in Wenatchee. Lynn was born 4/01/1967 in Goldendale, WA to her parents John Henderson and Nancy Henderson. She was eldest of their three children. Her siblings are Dawn Henderson/De... View Obituary & Service Information

The family of Lynn M Giraud created this Life Tributes page to make it easy to share your memories.