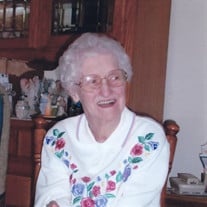 Marie S. Tasker, age 93 of Ephrata, died July 24, 2015 in Ephrata, Wa at the home of Bill and Barbara Hewitt. Marie was born July 10, 1922 at Altamont, Maryland, the oldest child of William H. and Dora V. (Steiding) Schmidt. Marie attended a one-room grade school at Wilson, Maryland and in 1939 graduated from Oakland High School, Oakland, Maryland. On October 21, 1939 she married Cortney Scott Tasker and they lived in Morgantown, W. Va. Marie attended Morgantown Business College and then worked for the War Department at the Morgan town Ordinance Works during World War II. After Courtney returned from the Army, European Theater they relocated to Washington state, living in Tacoma, Fife and Graham areas. Marie worked a variety of jobs; circulation bookkeeper for the former Tacoma Times, various positions for the Internal Revenue Service; Secretary at the Western Washington Research and Extension Service—Puyallup; a real estate salesperson with Century 21—Firgrove; selling Stanley Home products; and helping her husband with his work as an apiarist. In 1990 Marie and Courtney moved to the Ephrata, Washington area. She had a compassionate and caring attitude for the city and particularly the block in which she lived. Marie enjoyed people, reading, and life in general. She was a published poet, a volunteer at the hospital, and active in the Memorial Christian Church. Courtney died in 1998. She is survived by 3 sisters; Mildred Nethken and Dolores Poling of Hagerstown, Md., Margaret Garner of Bridgeport, Va., 7 nieces and 4 nephews. Marie has a large circle of friends, several of whom she referred to as family, among them Ida Williams and family, Norman (Buddy) Welch and the Bill and Barbara Hewitt family. Marie had a special comfort relationship with Angel and Mittens. During her end days Marie spoke anxiously about going home to be with her Lord and Savior Jesus Christ. Funeral Services will be held at 10 a.m on August 8, 2015 at Nicoles Funeral Home with a reception to follow at the Ephrata Senior Center. Interment was held at Valley View Memorial Park, Soap Lake on July 30. Memorials may be made to the charity of your choice. Please express your thoughts and memories and watch the online tribute video at www.nicolesfuneralhome.com Arrangements are under the care of Nicoles Funeral Home of Ephrata, Wa.

The family of Marie S Tasker created this Life Tributes page to make it easy to share your memories.