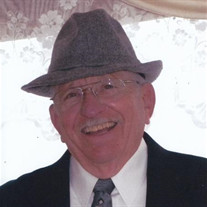 MARION “DOC” MCMANIS Doc, a resident of Soap Lake, Washington, passed away Saturday, Dec. 10, 2016 at Summerwood Alzheimer’s Special Care in Moses Lake, Washington, at 84 years old. Doc was born on November 21, 1932 to Basil and Mabel McManis in Nebraska. When Doc was two his mother passed away from an illness. His father decided to relocate to Washington State where Doc grew up. Doc met his wife, Shirley Miley, in school when they lived in Moxee, Washington. Doc enlisted in the U.S. Army and while on leave from boot camp married Shirley on her 18th birthday, June 28, 1953. He was sent to the Korean War but en route to Korea the war ended so he was stationed in Osaka Japan. After getting out of the Army, Doc and Shirley moved to Arlington, Oregon where they both worked on a large farm and in 1955 they had one son, Rick McManis. When their son was young they relocated to Buckley, Washington where Doc got a job working for Safeway. Doc had many hobbies including making things in his wood shop, showing his 1967 Ford Mustang in parades with his car club, camping and spending time with his family and loved ones. Doc is preceded in death by his bride, Shirley; his father Basil; his mother Mabel; and his sister, Helen Ross. He is survived by his son, Rick McManis; his three granddaughters – Melissa McManis, Melinda “Mindy” McManis, Maryann Paris; and his four greatgrandchildren – Jayni, Mykhia, Leland and Emily. The McManis family would like to extend a special thank you to Summerwood Alzheimer’s Special Care for their love and care to Doc during his final days. The family will have a memorial service to celebrate Doc’s life at Nicoles Funeral Home in Ephrata, Washington on Friday Dec. 16, 2016 at 2 p.m. Arrangements are being handled by Nicoles Funeral Home, Ephrata, Wash.

The family of Marion "Doc" McManis created this Life Tributes page to make it easy to share your memories.