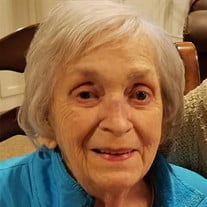 Mary Irene Laughinghouse, 85, of Soap Lake, Washington passed away peacefully on Sunday, August 6, 2017 at Summerwood Alzheimer’s Care Center in Moses Lake, Washington. She was born to Joseph and Joanna Alcock on December 23, 1931 in Kinston, North Carolina. Mary attended LaGrange High School in North Carolina and graduated from there in 1950. A few years later she met the man of her dreams Troy Laughinghouse, and they were married on December 10, 1956 in Dillon, South Carolina. Together they raised two daughters; Linda and Kathy. The couple lived in NC, WA, FL, and CA throughout their life until retirement when they made their home Ephrata. Some of her work history included National Airlines, Boeing, and retired from National Can Corporation where she was our “little can can girl”. When she was younger Mary enjoyed baking, canning, playing bingo, dancing and weekend camping and fishing trips until Troy passed away in 1990. Then Mary began traveling with her best friends Winnie and Flo and especially enjoyed their trips to the casino. She was an avid Mariners and Seahawks fan and didn’t like to miss a game. Mary is survived by her daughters Lynda (Dave) Harris of Arizona; Kathy (Tim) Reynolds of Soap Lake, Wa; her grandchildren Mike (Bea) White of Soap Lake, Wa; Alisha (Clarence) Smith, Amanda Reynolds both of Spokane, Wa; Andrea (Anthony) Hodges of Phoenix, AR; Cheyenne (Andrew) Dearing of Kennewick, Wa; Melinda (Galen) Woodward of Richland, Wa, and Jamie (Brian) Mangold of Maricopa, AR; and 14 great-grandchildren. She is preceded in death by her parents Joseph and Joanna Alcock; her husband Troy Laughinghouse, her sisters Myra Smith and Evelyn Baldree. A graveside service will be held at 10 a.m. on Friday, August 11, 2017 at the Ephrata Cemetery with a potluck following at the main beach in Soap Lake. Please express your thoughts and memories for the family at www.nicolesfuneralhome.com. Arrangements are under the care of Nicoles Funeral Home of Ephrata, Wa.

The family of Mary Irene Laughinghouse created this Life Tributes page to make it easy to share your memories.