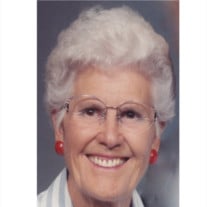 Mary Beth Smits was welcomed home on November 14, 2012. It is with grief and sadness that we bid her farewell. She will be greatly missed by all who knew her. Mary Beth was born on April 1st, 1923 in Hereford, Texas to Elizabeth Montague and Clifford Hicks. She graduated from Hereford High School and from McCullough Business College in Hereford. She married Russell Thomas in 1944 and they moved to Soap Lake, WA in 1951 to take part in the healing waters of Soap Lake. They enjoyed an active life of square dancing, boating and water skiing together until Russell passed away in 1970. Mary Beth married Gerald Smits of Wenatchee in 1979, and together, they worked to promote the benefits of Soap Lake water and to support the town she had grown to love. Jerry has been her companion, best friend, loving husband and devoted caregiver during the time they shared together. She was a tireless volunteer for the city. She served as head of the Suds ‘N Sun Celebration in the late ‘60s, was active in the Chamber of Commerce, often gave interviews or appeared in documentaries about Soap Lake, and was the Grand Marshall for the Fourth of July parade in 2011. Mary Beth is best known for her career with the Postal Service. She became a clerk at the Soap Lake Post Office in 1953 and rose to the position of Post Master. She received many awards for Outstanding Service while serving in that position. She also served as a visiting Post Master with the US Postal Service until her retirement in 1983. She spent many Christmas Eves personally delivering late packages to local families. Mom was a generous person and was always willing to go the extra mile to make sure everyone was well taken care of and that each job was done as it should be. This was true in her personal life as well as her professional life. After retirement, Mom and Jerry continued to volunteer in the community and were able to travel and share many winters with their good friends in the south. Mom valued her friends and the time spent with the “Red Hat Ladies.” She was a member of the Ephrata Methodist Church and truly appreciated the shared devotion and support from church members as she became less able to attend regularly. She was a member and Past Worthy Matron of Ephrata Chapter 856 Order of Eastern Star, an active member and Past President of Ephrata Chapter of NARFE, and an active member of 1816 Road Runner RV Group, the Ephrata Ladies of Elks, the Lakeview Golf and Country Club, and the Soap Lake Chamber of Commerce where she served two years as Secretary/Treasurer. Mary Beth was predeceased by her parents, Clifford and Elizabeth Hicks, brothers, Donald and Elmo and sister, Ida Belle, all of Hereford, Texas, and son-in-law Darold Thornton of East Wenatchee. Her brother, Robert, lives in Hereford. She is survived by her husband, Jerry Smits, her daughters, Rosalie Thomas (Don Cox) of Gig Harbor and Carolyn Wollenweber of Tacoma, Jerry’s children Barbara Smits Thornton, John Smits (Pam), Paul Smits (Lori) all of Wenatchee, and many grandchildren and great grandchildren. We are grateful for all the love that she has given us, and for the many lessons she taught along life’s path. We want to express our gratitude to the wonderful caregivers at Bonaventure Assisted Living, Wenatchee, the staff at Central Washington Hospital, and the wonderful caregivers at Highline Care Center. Your loving kindness is very appreciated by the family. Graveside services will be held at Valley View Memorial Park at 10 AM on Tuesday, November 20, 2012 with memorial services at the Ephrata Methodist Church at 11 AM and a reception to follow. In lieu of flowers, please consider a donation to the Ephrata Methodist Church or the Alzheimer’s Association at http://www.alz.org/join_the_cause_donate.asp Please express your thoughts and memories for the family and view the online tribute video at nicolesfuneralhome.com. Arrangements are under the direction of Nicoles Funeral Home of Ephrata, WA.

Mary Beth Smits was welcomed home on November 14, 2012. It is with grief and sadness that we bid her farewell. She will be greatly missed by all who knew her. Mary Beth was born on April 1st, 1923 in Hereford, Texas to Elizabeth Montague... View Obituary & Service Information

The family of Mary Beth Smits created this Life Tributes page to make it easy to share your memories.