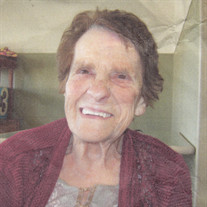 Maxine Joy Lyerly (Williams) returned home to her beloved Jesus on April 26, 2018. Maxine succumbed to her struggle with Alzheimer’s disease but not before living a long, rich and love-filled life. Maxine began her life on October 15, 1927 in Seattle, Washington. She was the second born child of Anna and Frank Williams and the sister of Marlin, Bob, Lauren and Geraldine. She grew up during the Great Depression when time were hard but in spite of that or maybe due to that, there was never a lack of love in her family. This forged such a strong family value within her that even to the end of her life she would say without hesitation that “family is everything”. She was indeed the matriarch of the Lyerly-clan that she built with her husband of 55 years, Earl Lyerly. Earl and Maxine met in Seattle shortly after World War II as they were both riding the bus to and from work. It took some time but Earl eventually won her over and they wed on October 17, 1947, just two days after she turned twenty years old. They started their family with the birth of their first daughter Sandy in 1948, followed by Barbara in 1949, then Jim in 1952, and finally Pam in 1956. Around 1950 Maxine and Earl moved to Diablo, WA so Earl could work for Seattle City Light. During that time Maxine took her one and only hiatus from working to focus on the job of raising a family. In 1963 they moved the family to Ellensburg and shortly there after to Ephrata, which became their home for the next 52 years. During those years Maxine raised her family with much love and support. She did it all – Sunday school teacher, cub scout leader, provided child ferrying services, was the best sleepover mom in town, and besides cooking a great dinner every night (with dessert), she could make Easter dresses and prom gowns like a professional. None of her love and support waned after her children were grown either – it was just passed on to all her grandchildren and great-grandchildren – six grandchildren, eleven great-grandchildren, and two great-great-grandchildren at last count. Mom and dad took a lot of trips to North Carolina to see dad’s parents. Those trips alone could fill a whole book. They took countless other trips around the country, could throw a weekend long party like no one else, and they dance – every weekend they danced. On top of all that, Maxine worked as a bookkeeper full time. First for Geesey’s Men’s Wear and then for Marina at Don’s in Soap Lake for over thirty years until she finally retired at eighty years old. Maxine was a very devote and faithful servant to her Heavenly Father. As a child her faith was strong as she attended the Assembly of God church. She raised her children in the Episcopal church. For the last thirty years of her life she was a member of the Methodist church in Ephrata, WA. All of her life her faith did not waver, and she drew much strength from it. She yearned to be with her Heavenly Father again and now she is. She was truly blessed by her faith. Maxine will be remembered for the kind-hearted, hard-working, excellent cooking, generous, loving and devote person she was. She will be sorely missed. She is survived by her sister Geraldine Cunningham; her children Sandy (Gary), Barbara, Jim (Joan), and Pam; her grandchildren Geoff (Elisabeth), Trevor (Sarah), Becca (Ryan), Carrie (Randy), Ryan (Nikka), Anna (Justin); Great grandchildren Stephanie (Elliot), Eric, Brahm, Saunder, Corinn, Maggie, Ashley, James, Drew. Evan, Luke and great-great-grandchildren Aiden and Evelyn. A celebration of life service will be held at Our Redeemer Presbyterian Church, 172 Ivy St SE, Ephrata, Wa 98823 on Saturday, May 19, 2018 at 1:00 p.m. Please express your thoughts and memories for the family at www.nicolesfuneralhome.com. Arrangements are under the care of Nicoles Funeral Home of Ephrata, Wash.

Maxine Joy Lyerly (Williams) returned home to her beloved Jesus on April 26, 2018. Maxine succumbed to her struggle with Alzheimer&#8217;s disease but not before living a long, rich and love-filled life. Maxine began her life on October 15,... View Obituary & Service Information

The family of Maxine J Lyerly created this Life Tributes page to make it easy to share your memories.