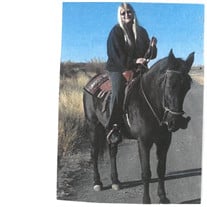 Nanci Knemeyer (Chamberlin) passed away on December 17th, 2020. She was tougher than COPD but ultimately, she was not meaner than cancer. Nanci was born to JoAnn Kingery and Loren Knemeyer in Los Angeles, California on March 27th, 1957. She inherited her feisty nature from her mother – her sense of humor from her father. She teased, joked, loved, and lost, and always put other before herself. Nanci lived much of her life in Wenatchee Washington, she moved to Ephrata Washington where it was home in 2012, this is where she lived out her days with her love, friend, and confidante, Sidney Anderson. Nanci married her first husband and was blessed with 3 children. She later divorced having one more marriage until she found the love and comfort with Sidney in Ephrata. She was never happier than she was out on the open land with her horses, and dogs Libby and Missy. Throughout her life, she worked at a multitude of jobs, bartending, food service, misc. farm work, and found her passion with education in accounting. Nanci loved working outside with flowers and gardening, she prided herself in being able to get a job done and done well. She always had a way of getting her point across in situations and conversations and was able to stand her ground in what she believed was right. She was a jokester, she would be able to tell jokes all night without repeating a one, but until recent years she was sheltered, naive, and slow to the punch. She would always look at you and say “what” with a smile. Nanci is together at last with her parents (JoAnn and Loren), and her brother (Billy). She is survived by her sister (Lori (Evan) O’Malley, brothers David and Tommy Knemeyer, and stepmother Judy Knemeyer. Her children, Kenneth David (Vanessa) Jarrett, Amber Dawn Gerrard, and Dennis Lee Jarrett Jr. will carry on their mother’s penchant for finding adventure wherever they wander. Her grandchildren, Arianna Jarrett, Daniel Jarrett, Nathan Jarrett, Nicole Jarrett, Dawson Jarrett, Madison Stuwart and Hailey Boldt Gerrard and greatgrandchildren Henry and Judah will carry on her legacy of showing the world what it means to be strong, independent individuals that will not be ignored. Services will be announced as we are currently unable to gather to pay tribute to Nanci’s celebration of life. Condolences and questions can be directed to her son David Jarrett (509) 844-2793

Nanci Knemeyer (Chamberlin) passed away on December 17th, 2020. She was tougher than COPD but ultimately, she was not meaner than cancer. Nanci was born to JoAnn Kingery and Loren Knemeyer in Los Angeles, California on March 27th, 1957. She... View Obituary & Service Information

The family of Nanci Ruth Knemeyer created this Life Tributes page to make it easy to share your memories.