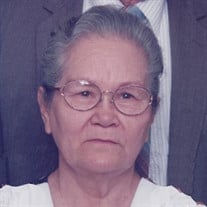 January 1, 1928 - October 4, 2015 Long-time Soap Lake resident Nina Sergeeff passed away on Sunday, October 4, 2015. Nina was born in 1928 in Urumqi, Xinjiang Province in northwest China. The journey that led her to Soap Lake took her half way across the world, from Bejing where she departed China to the Philippines where she became a cook. Next she went to Paraguay where she picked cotton and married her beloved Gregory. The first four of their eight children were born there. By 1957 Nina and Gregory took their young family to San Francisco where life in yet another new country found them both working hard to learn English and support their family. Gregory worked two jobs and Nina began sewing sleeping bags, which was a turning point in her future career as a master seamstress. After the tragic loss of their second child, Mike, they moved to Seattle in the mid 1960’s. It was here that Nina became recognized for her skills as a seamstress. Working for large sportswear company Alderwood Mfg., she was custom sewing clothing for White Stag, Columbia and Edie Bauer. Nina was sought after for her sample work, each hand-made piece created by Nina helped sell the manufacturers clothing line for the following years. She eventually branched off into her own business where she stitched for Seafairs famous King Neptune and Queen Alcyone, pit uniforms for Circus Circus, Washington Plaza and again for Eddie Bauer. Employing 60 plus workers. Nina and Gregory became frequent visitors to Soap Lake; eventually buying a home that was once the Thomas Hotel. Eventually they sold that home and bought another one named Evergreen Court, a block away. They loved swimming in the lake and Gregory was an avid fisherman who knew well the many fishing holes in nearby fresh water lakes. Gregory retired to Soap Lake in the 1980’s. Nina travelled back-and-forth from Seattle to Soap Lake until her retirement in 1990. Nina was a wife, a mother, a grandmother and a great grandmother, she was also a dear friend, mentor and ally to the growing Ukrainian community that came to rely on her for help. Nina spoke several languages including several Slavic dialects, Spanish and some Chinese that she did not forget. Once she had moved full-time to Soap Lake she worked tirelessly on behalf of Ukrainian immigrants who came to the area sponsored by the church. Nina volunteered with the school system to assist Ukrainian students with their English-speaking skills while helping their parents maneuver through the immigration process and social services. Nina helped dozens of families over the years. She was a devout Christian and cared deeply about the well being of her family and friends. Nina was a rock for all those who knew her. She would drop everything she was doing and accommodate an unexpected guest. She always had something cooking on the stove. Her soups, especially her borsche, pierogis, and baked goods were out-of-this world. She cooked authentic, just like she lived her life; genuinely devoted to her family and the people she loved, no one left her presence without something to show for the encounter. She gave and gave and kept on giving. She sewed blankets for babies and friends; she helped repair torn things, including the lives of some of her friends. Not one living person who knew Nina Sergeeff would say anything but the kindest word to honor a woman who gave more than anyone of her small stature could possibly give. She will be missed, yes, but she leaves a legacy of goodwill that will remain a beacon in the hearts of her family who love and miss her dearly and all the people whose lives she touched. Soap Lake has lost an icon, but the heavenly realms have gained an angel who will shine bright as any star that brings peace to all the weary. Nina was preceded in death by her husband Gregory and her sons Mike and Paul. She is survived by her children Alex, Danny, Tava, Lilia, Vera, and Nida, 12 grandchildren and 6 great-grandchildren with two more on the way. A funeral service will be held at 11 am on Saturday, October 10, 2015 at the Community Evangelical Free Church, 110 Main Ave E, Soap Lake with graveside service to follow at Valley View Memorial Park. A reception will follow at the Evangelical Baptist Church, 319 5th Ave SE, Soap Lake. Please express your thoughts and memories for the family and view the online tribute video at www.nicolesfuneralhome.com. Arrangements are under the care of Nicoles Funeral Home of Ephrata, Wash.

January 1, 1928 - October 4, 2015 Long-time Soap Lake resident Nina Sergeeff passed away on Sunday, October 4, 2015. Nina was born in 1928 in Urumqi, Xinjiang Province in northwest China. The journey that led her to Soap Lake took her half... View Obituary & Service Information

The family of Nina A Sergeeff created this Life Tributes page to make it easy to share your memories.