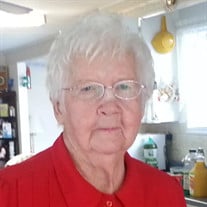 Nora Mae Stephens September 26, 1923 – February 15, 2016 God called Nora Mae home early on the morning of February 15, 2016 after a long difficult battle. She slipped away peacefully in the early morning after a week of having at least two of her “four” children with her at all times. Nora Mae was born on September 26, 1923 to Richard and Belle McCormack in Melbourne, AR. She met Conrad Stephens in 1940 and they were married on January 25, 1941. Nora Mae and Conrad were married 70 years and were blessed with 3 children. Lavaughn was born in Arkansas, Darrel was born in California and Louise was born in Washington. The family spent many years in the Okanogan Valley where Nora Mae worked in the fruit, but the one job she loved talking about was her time spent at the Spudnut Shop in Omak, and especially the time she worked there with her beloved “little sister” Mary. Work took them for a brief time to Spokane and then to Othello. After several years of following construction, Conrad and Nora Mae retired in Ephrata, Mom was truly a homemaker and that was her passion. She loved the Lord, her family and her church family at the Church of Christ in Ephrata. Nora Mae is survived by her “four” children, Lavaughn and Terry Stephens of Spokane, Darrel Stephens of Pasco, and Louise Stephens of Wenatchee; grandchildren, Kimberly Meyer of San Diego, Craig Stephens of Spokane, and Jennifer Kenyon of San Diego; eight great-grandchildren, Joel, Gabrielle and Sophie Meyer, Cameron, Tyler and Amanda Stephens, and Julian and Audrey Kenyon, one brother, Verdel (Lola) McCormack, one sister-in-law Shirley McCormack, Omak, one brother-in-law John Matlock, Cameron, AR and many beloved nieces and nephews. She is also survived by her dear friend Mary Barnes. Her husband of 70 years preceded her in death in November of 2011. A special thank you to Dr. Carlson and the staff at the Wenatchee Valley Clinic Radiation Oncology, Assured Hospice of Moses Lake and her “Church Family” at the Ephrata Church of Christ. Following a private burial, there will be a Celebration of Life at the Church of Christ, 31 Crest Dr., Ephrata, WA 98823 at 11:00 am, February 20, 2016. Doug Berry will be officiating. Arrangements are under the direction of Nicoles Funeral Home, Ephrata.

Nora Mae Stephens September 26, 1923 &#8211; February 15, 2016 God called Nora Mae home early on the morning of February 15, 2016 after a long difficult battle. She slipped away peacefully in the early morning after a week of having at least... View Obituary & Service Information

The family of Nora Mae Stephens created this Life Tributes page to make it easy to share your memories.