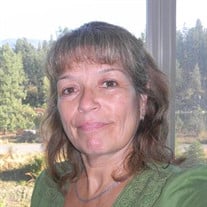 Norma Jean Gardoni-Lovejoy April 12, 1957 to July 21, 2017 Norma went to be with the Lord on July 21, 2017. She was born on April 12, 1957 in Glendale, CA to Antonio and Hortencia Gardoni. Norma went through all her school years in Palmdale, CA and graduated in 1975, growing up she always loved animals and going fishing. As Norma became an adult she continued to love fishing, growing roses, gardening, bird watching and being with the house cats. Norma worked in the aircraft industry as an air-frame mechanic from the time she graduated from high school until 2016. She always loved and was very passionate about her job and the people she worked with. Norma met Sam Lovejoy in 1997 and they were married on July 16th, 2002 and stayed married until her death. Most importantly Norma was a Christian and nothing could change her faith in the Lord. She would always light up the room she came into with her smile and singing. We will all miss her tremendously. Norma is survived by her loving husband Sam Lovejoy of Ephrata, WA, 1 stepson Kelsey Lovejoy of Lynwood, WA; 1 stepdaughter Lacy Robinson of Post Falls, ID; Mother Hortencia Jaramillo of Sparks, NV; Sister Joann Wright of Layton, UT; Brother Antonio Gardoni of Sparks, NV; half Brother Frederick Jaramillo of Ephrata, WA; half-sisters Antoinette Duarte of Lancaster, CA and Debbie Gardoni of CA; along with 5 grandchildren. Norma was preceded in death by her father Antonio Guillermo Gardoni. A memorial service will be held at 1p.m. on Saturday, August 5, 2017 at Nicoles Funeral Home, 157 C St NW, Ephrata, WA. Please express your thoughts and memories for the family at www.nicolesfuneralhome.com.

The family of Norma Jean Gardoni-Lovejoy created this Life Tributes page to make it easy to share your memories.