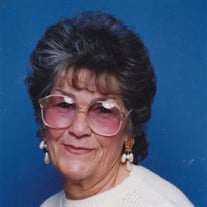 Norma Lee (Parrish) Elliott/Guilmette, 86, of Soap Lake, Wa (for the past 61 years) passed away June 29, 2016 at McKay Nursing Home in Soap Lake. She was born Feb. 29, 1930 in Benton, Ill, Franklin County to William Lee Parrish and Pansey Louise (Leffler) Parrish (Grandma “Pat”). She went to school through the 11th grade in Wenatchee, WA. Norma married Robert Franklin Elliott in ILL. They came to this area in 1954 for Bob to work on the canal system that was to go in. When they started to get off the train, they opened the doors to our hot dust bowl, with no trees. Bob wasn’t getting off. Norma had to push him out of the doors. She has been here ever since. She was a homemaker and her and Bob raised 3 boys, Don, Ron, & Terry. They loved to go camping on Bob’s vacation time in the summers and hunting deer, birds etc. in the winters. Those were her most favorite memories as a family. Years later, her & Bob divorced and in 1967 she married Sumner Guilmette in Ephrata. He was a truck driver and when he worked up in the woods at logging camps, they bought a big camper trailer to live in up there in the summers. She loved being out in the woods, hiking, 3 wheeling, making campfires, and cooking over the campfire. Winters, they loved to go snowmobiling. She loved the outdoors and kept a beautiful lawn, flowers, trees & bushes. She canned things from her garden and the fruit trees. Other things she enjoyed were art, sewing-making stuffed animals & dolls etc. She also loved, and was known for the last few years, was her sassy, bright red hair. Norma loved decorating the house for holidays, especially Christmas. They won many first place awards for the best outside lighting displays. Our kids remember her big bags full of popcorns balls for Halloween, and many individual kinds of homemade candies and fudges for Christmas. She is survived by her half-sister, Juanita Coffey of Yakima and her oldest son, Donald DeWained Elliott and wife Janice Arlene (Nicholson) Elliott of Soap Lake, Gill’s son, Michael (wife Judy) Guilmette of East Wenatchee, daughters Louise & Evelyn of VT. She has 10 grandchildren & 11 great-grandchildren on the Elliott side and many others on the Guilmette side. Norma was preceded in death by her father & mother, brother Dale, husband Sumner Guilmette & 2 sons Terry Gale & Ronald Elliott. There will be an informal Celebration of Life for family and friends from 2-5pm Saturday, July 9, 2016 in the back room at Time Out Pizza in Ephrata, WA. Many thanks to Nicoles Funeral Home of Ephrata, WA for taking care of arrangements & helping us out with details we needed to know & do. Thanks to McKay Nursing Home for all of their care of Norma,& us. Thanks to Hospice for coming to care for her in her home & then helping when she was at McKay. And to Aging & Adult Care for getting us started on the process of caring for her at home. A special thank you goes to Christy, Shannon & Jennifer, Norma’s Care Givers who took good care of her at home. We appreciate you more than you know for taking care of her and giving us a break to do things we needed to do. Also to her many friends she had throughout the years.

The family of Norma Lee Guilmette created this Life Tributes page to make it easy to share your memories.